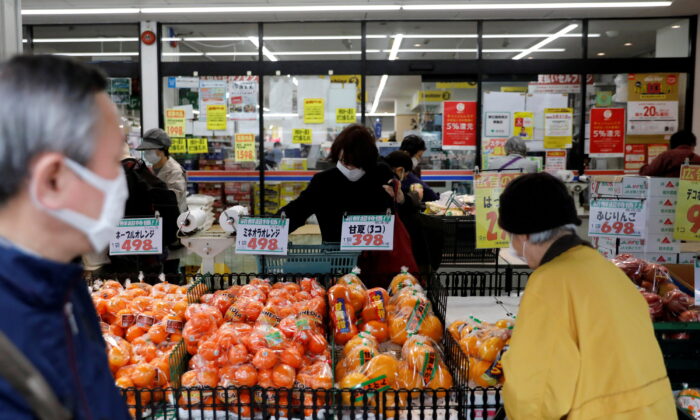 Shoppers wearing protective face masks, following an outbreak of COVID-19, at a supermarket in Tokyo on March 27, 2020. (Issei Kato/Reuters)
Inflation

TOKYO—Japan’s core consumer inflation accelerated in July to its fastest in seven-and-a-half years, driven by fuel and raw material prices and adding to the costs of living for households yet to see significant wage gains.

In a sign of broadening price pressure, the so-called “core core” index that strips away not just the impact of volatile fresh food but energy prices, also rose in July at the fastest annual pace in more than six years.

While inflation exceeded its 2 percent target for four straight months, the Bank of Japan (BOJ) is likely to remain an outlier in keeping monetary conditions ultra-loose with price rises still modest compared with other major economies.

“As wage growth undershoots inflation, price hikes will weigh on real wages, squeezing household purchasing power ahead,” he said, projecting the BOJ to keep policy unchanged through fiscal 2023 and 2024.

That followed a 2.2 percent gain in June and marked the fastest pace since December 2014, excluding sales tax hike effects.

While energy prices remained key drivers of inflation, price hikes accelerated for a wide range of food products in a sign companies continue to pass on rising costs to households.

The core-core index, which strips away both the effect of volatile fresh food and energy, rose 1.2 percent in July from a year ago, the fastest since December 2015.

While the core index is still the BOJ’s key price gauge, the central bank has recently placed more emphasis on the core-core index to gauge how much of the inflationary pressure is coming from domestic demand, rather than one-off factors like energy costs.

Japan’s economy rebounded at a slower-than-expected pace in the second quarter from a COVID-induced slump, highlighting uncertainty on whether consumption will grow enough to bolster a much-delayed, fragile recovery.

Policymakers are clinging to hope that big manufacturers, which benefited from solid global demand and the profit-boost from a weak yen, will lead the way in boosting wages to help cushion the blow to households from rising living costs.

BOJ Governor Haruhiko Kuroda has stressed that the central bank will not see an exit from its massive stimulus programme until consumer demand picks up.