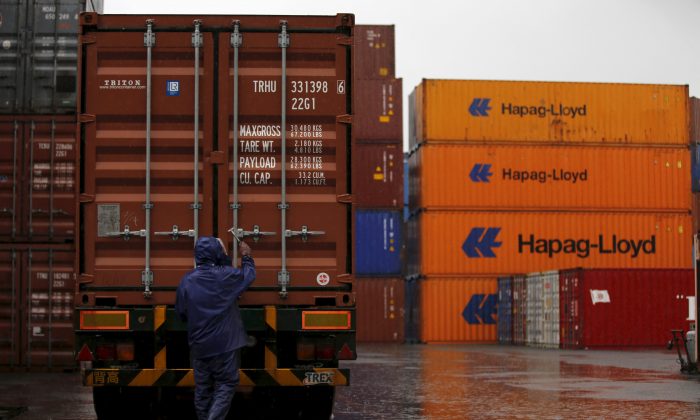 A man works at a container area at a port in Tokyo, Japan on Sept. 8, 2015. (Toru Hanai/File Photo/Reuters)
Asia & Pacific

TOKYO—Japan’s economy shrank more than expected in the third quarter, hit by natural disasters and a decline in exports, a worrying sign that trade protectionism is starting to take its toll on overseas demand.

The contraction in the world’s third-largest economy adds to growing signs of weakness globally, with China and Europe losing momentum. Data released later in the day showed Germany’s economy also contracted in the third quarter on weak foreign trade.

Despite the setback, Japan’s government stuck to its view that the economy continues to recover moderately, blaming the contraction on typhoons and an earthquake that halted factories and stifled consumption.

But some analysts said such one-off factors alone could not explain the downturn, pointing to worrying declines in exports amid slowing Chinese demand and the fallout from escalating global trade friction.

“The message is China’s economy is weakening, which means Japan’s exports will be slow to recover and growth will stall around the first half of next year.”

The annualized 1.2 percent contraction in July-September was bigger than a median estimate for a 1.0 percent drop and followed a robust 3.0 percent expansion in the previous quarter, government data showed on Nov. 14.

The slump was driven largely by a 1.8 percent fall in exports, the biggest drop in more than three years. Capital expenditure, which rose 3.1 percent in April-June, dropped 0.2 percent to mark the first decline in two years, the data showed.

Analysts do expect a rebound in the current quarter, but warn it could be tepid and growth could stall next year, when the strains from trade conflicts become more acute.

“U.S. tariffs on its imports of Chinese goods take effect in January, curbing Chinese shipments, which will in turn damage Japanese exports and capital expenditure,” he said.

Policymakers in a Bind

Private consumption, which accounts for about 60 percent of GDP, fell 0.1 percent in July-September as consumers spent less on travel, lodgings, and dining out.

While the government is considering a stimulus package of around 10 trillion yen ($88 billion) to offset the tax hike impact, a darkening overseas outlook could strengthen politicians’ calls for even bigger spending.

That puts policymakers in a bind. Many analysts see little room for the Bank of Japan to ramp up an already huge stimulus drive that is straining financial institutions.

“Monetary policy is stretched so it would be difficult to take additional easing steps. Fiscal measures are already being considered to offset a blow from the sales tax hike, so there’s little room left on this front too,” said Takeshi Minami, chief economist at Norinchukin Research Institute.

“But you cannot rule out the possibility of a bigger spending package, depending on the extent of economic slowdown.”

Japanese factories were quick to recover from the third quarter’s natural disasters. The bigger concern among Japanese firms is the trade war between the United States and China, as it threatens Japan’s exports of car parts, electronics, and heavy machinery.

“IT-related exports to Asia have been slowing from around spring, so we need to be mindful of the impact trade frictions and China’s growth outlook could be having on Japan’s economy,” Economy Minister Toshimitsu Motegi told reporters after the GDP data came out.