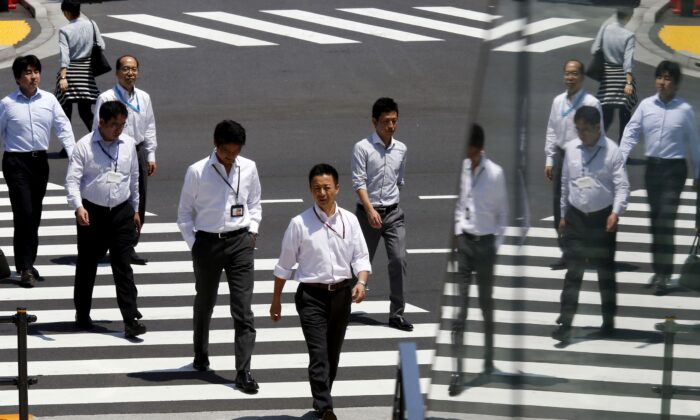 Office workers are reflected in a glass railing as they cross a street during lunch hour in Tokyo, Japan, on June 1, 2015. (Thomas Peter/Reuters)
Economy

The seasonally adjusted unemployment rate in December was lower than the 2.8 percent in the previous month, which was also the median forecast in a Reuters poll of economists.

The seasonally adjusted number of employed people grew by 490,000, the biggest gain since January 1986, to 66.7 million in December.

“Employment figures were growing in sectors such as hotel and restaurant services, reflecting low COVID-19 cases in December,” a government official said.

“However, we need to pay close attention to the outlook (for employment) as coronavirus infections are rising because of the Omicron variant.”

A gauge of job availability also rose. The jobs-to-applicants ratio was 1.16 in December, labor ministry data showed, up 0.01 point from the previous month’s reading and matching a Reuters poll forecast of 1.16.