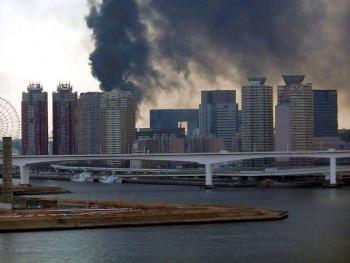 Japan’s modern buildings now rest on huge, three-foot-wide rubber or fluid-filled shock absorbers. In addition, heavy weighted cables, huge steel springs, and mammoth sliding metal plates, help dissipate lateral motion, ensuring the structural integrity of medium- and high-rise structures during a quake or high winds. Even the steel frames of newer buildings are designed to be flexible, so that they can absorb vibrations without snapping.

During Fridays quake, some skyscrapers could be seen swaying several yards back and forth, yet the buildings sustained minimal damage.

According to Sander Pasterkamp, a lecturer and researcher in construction design at the Delft University of Technology in Delft, Netherlands, the damage could have been a whole lot worse, even by Japanese standards.

Pasterkamp noted that at the top of the famous skyscraper, Taipei 101, in Taiwan, is a very large, very heavy ball hanging on a monstrous cable. If the building were to swing from left to right during high winds or during a quake, the ball would start swinging in the opposite direction the building is leaning toward, thus effectively stabilizing the building.

By Pasterkamp’s estimates, 90 percent of the damage that Japan experienced over the last few days was due to the Tsunami itself, not earthquake damage. “The [Japanese] engineers deserve to be complimented,” he said.

Regarding Japan’s nuclear reactor issue, Pasterkamp said that although the reactor was built decades ago and did not employ the most advanced building designs of today, he believes that the engineers back then used the best building designs available to them, at that time.

Pasterkamp believes that when engineers decided to build the nuclear reactor close to the coast, they must have given careful consideration to the possibility of a tsunami.