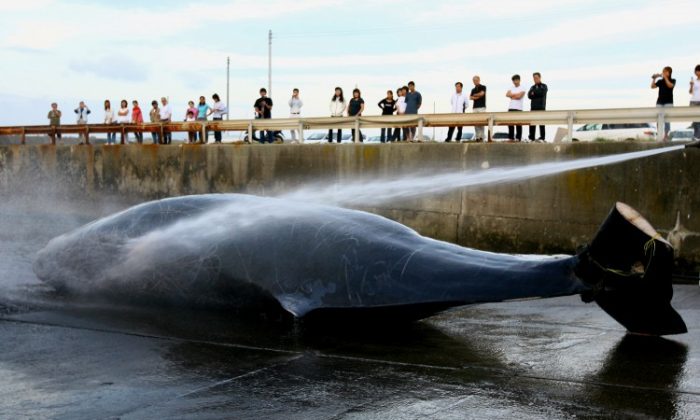 Vigilante conservation group Sea Shepherd headed off Japanese whalers Wednesday, effectively halting the fleet’s hunt. The annual face-off on the Antarctic seas may be a thorn in the industry’s side, but greater forces are slowly killing the industry, according to the International Fund for Animal Welfare (IFAW).

An IFAW report, titled “The Economics of Japanese Whaling,” released this month shows that Japanese whalers are highly subsidized, operate at a loss, and face a declining market for whale meat.

“Beneath the surface, a shift is taking shape in Japan’s approach to the whaling issue,” wrote Patrick Ramage, IFAW Whale Program director who has spent 20 years working on the issue, in an IFAW article introducing the report.

“So far the shift is fragile, like porcelain and rice paper, but the IFAW’s new report … is helping light the way,” Ramage wrote.

Japan’s whaling fleet is operated by the Institute of Cetacean Research (ICR) in the name of scientific research. Activists believe that it is a thinly veiled commercial enterprise.

The IFAW cites a 2006 review by the International Whaling Commission (IWC) that showed ICR’s research had not met any of its objectives.

The Japanese government continues to pump as much as 782 million yen (approximately US$9.78 million) annually into whaling, even diverting tsunami aid money to the ICR, reported the IFAW.

The ICR, however, operates at a loss on the tax payer’s dollar.

Whale meat consumption is waning in Japan—it peaked in the 1960s and is now at only 1 percent of that peak level. A last-ditch attempt to auction off stockpiles last year failed to offload three-quarters of the meat.

The Japanese has long viewed whaling as part of their cultural heritage, yet 54.7 percent of Japanese polled by the IFAW are now indifferent to the topic. About one-quarter of respondents, 27 percent, said that they support whaling.

In a 2005 paper published in the Journal of International Wildlife and Policy titled “Why Japan Supports Whaling,” Keiko Hirata of California State University noted Japan’s eagerness to be a key player in international environmental initiatives.

Hirata asked, “If Japan is serious about environmental protection and desires to play a role as a ‘green contributor,’ why hasn’t it embraced the anti-whaling norm, thereby joining other states in wildlife protection and assuming a larger role in global environmental leadership?”

Internal vying between governmental departments was part of Hirata’s self answer.

Japanese members of parliament do not have control over whaling policies. It is the Ministry of Agriculture, Forestry and Fisheries (MAFF) and the Fisheries Agency that manage the industry.

“The end of whaling could mean a decline in these agencies’ political power,” wrote Hirata. “Given intense interministerial rivalries in Japan, it is not likely that these bureaucratic actors would voluntarily concede one of their areas of jurisdiction. Instead, these officials may want to eventually resume commercial whaling to further strengthen their position in domestic bureaucratic politics.”

Hirata laid out the four main reasons cited by the Fisheries Agency and the MAFF to perpetuate whaling:

First, it is part of Japan’s cultural heritage. Second, they contend that some species of whale need to be culled to maintain an ecological balance. Third, it is necessary for scientific research. Fourth, they point out that the IWC’s moratorium on whaling instated in 1982 only restricted commercial whaling until 1990.

The IFAW suggests an alternative way to enjoy—and profit from—whales without controversy: whale watching. The IFAW reported that the whale-watching industry has grown by 6.4 percent annually on average, and in 2008 earned 1.76 billion yen (approximately US$22 million).