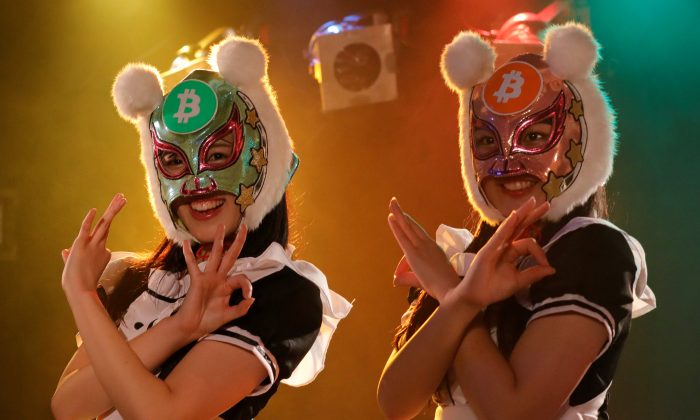 TOKYO—A Japanese pop group hopped on the bitcoin bandwagon on Friday Jan. 12, dedicating themselves to singing and dancing about the cryptocurrencies that have taken the world by storm, and especially their homeland.

In their debut, the eight “Virtual Currency Girls”, or Kasotsuka Shojo in Japanese, cavorted in maid costumes with frilly skirts and full-face professional wrestling-style masks with fuzzy pom-pom ears, extolling the virtues of decentralized digital currencies such as bitcoin.

“They’re so convenient you kind of have to wonder why we didn’t have them before,” said Rara Naruse, 18, the group’s leader. “We want everyone to learn more about them.”

Each group member adopted the guise of a different cryptocurrency, offering a brief self-introduction to 20 fans gathered at the venue in downtown Tokyo.

Then they launched into “The Moon, Cryptocurrencies and Me”, a stirring anthem incorporating lines such as “Be careful about your password! Don’t use the same one!” to warn against the dangers of trading cryptocurrency, and also more obscure ones, in English, such as “Hot day, forget myself, go to the moon.”

Naruse emphasized on the group’s website that it is not out to promote investment, but rather to teach people about cryptocurrencies in an entertaining way.

The maid costumes aimed to raise the group’s popularity with the use of a globally recognizable “uniform,” she added. Naturally, all merchandise sold at the venue is paid for in bitcoin, as are concert tickets and the members’ salaries.

“I know absolutely nothing about bitcoin and other cryptocurrencies, but I want to make sure I have some on hand for further concerts and to buy merchandise,” said fan Kensaku Nagao, 46.

Japan and South Korea are home to some of the bigger digital exchanges, with investors piling in as growth in bitcoin and other cryptocurrencies soared last year, provoking regulators’ concerns.