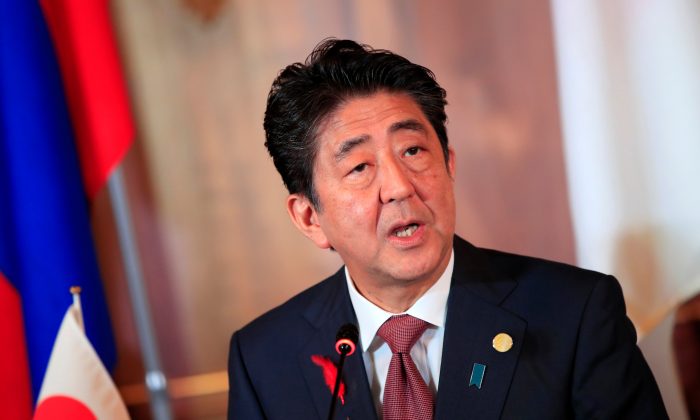 BEIJING—Prime Minister Shinzo Abe will visit China from Oct. 25 to 27 in the first official visit by a Japanese leader in seven years, China said on Oct. 12.

Visits by Abe in recent years to attend multilateral events in China have not been considered official visits.

Abe’s October meeting with Xi, officially confirmed on Oct. 12, will be the first full-scale Sino-Japanese summit since 2011.

In September, after meeting Chinese leader Xi Jinping in Russia, Abe said the two sides had agreed to work toward an October visit.

Abe returned to office for a rare second term in December 2012, promising a hard line toward China in a territorial row over tiny islands in the East China Sea.

“To ensure that Japan has sustainable economic growth, you cannot ignore economic relations with China,” said a Japanese foreign ministry official, who spoke on condition of anonymity.

Japan’s direct investment in China rose in 2017 for the first time in five years, a trend that continued in the first eight months of 2018, the Japan External Trade Organization said in a report that also flagged growing Japanese exports to China.

A highlight of Abe’s visit is expected to be a forum attended by up to 1,000 executives and trade officials to discuss China-Japan economic cooperation in third countries.

China hopes Abe will support its One Belt, One Road initiative (OBOR, also known as Belt and Road), a vehicle to fund and build global transport and trade links in more than 60 countries.

The OBOR initiative has come under fire for saddling poor nations with unsustainable debt through big projects that are not economically viable.

Abe may, however, shun the OBOR initiative.

Japanese defense officials are wary of its military implications, and Tokyo is pushing its Free and Open Pacific Strategy to promote free trade and infrastructure across Asia, Africa and the Middle East.

“This is not ‘support’ for Belt and Road. We will not ease global standards,” a Japanese trade official said.

Several non-binding agreements, known as MOUs, are expected from the forum, including one on a project in Thailand, a Japanese source involved in the forum planning said.

Japan is involved in efforts to forge a Regional Comprehensive Economic Partnership among 16 nations including China, as well as in talks on a China-Japan-South Korea free trade pact.

Abe and Trump have agreed to start talks on a new Japan-U.S. trade deal that Washington hopes will cut its trade deficit, while Tokyo aims to avert higher tariffs on its auto exports.

The U.S. State Department and White House declined to comment when asked about the coming Abe-Xi summit.

A U.S. push to get Japan to join efforts to isolate China would present Tokyo with a dilemma, although officials said Abe could tell Trump that Japan was taking a different approach with the same goal–convincing China to play by global rules.

Such U.S. pressure could find support inside Japan.

Many conservative politicians are deeply wary of China, as are many Japanese voters. A survey published on Oct. 11 showed 86 percent of Japanese had a “bad image” of China.

“There are some in Japan who think the security relationship with the United States takes precedence over Japan’s economic issues,” said Kiyoyuki Seguchi, research director at the Canon Institute for Global Studies.

“But if one…asks whether economic development is possible without cooperative development with China, the answer is ‘No’.”