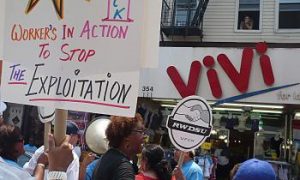 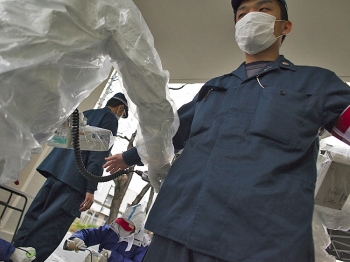 Fukushima Daiichi Plant Workers Could Work Themselves to Death

Tokyo Electric Power Co. (TEPCO) workers, who have been working tirelessly to stabilize the fragile Fukushima Daiichi nuclear plant, are at risk of depression and even death from overwork, says a doctor who recently examined them.

Dr. Takeshi Tanigawa told Kyodo News in an interview on Wednesday that the workers are committing themselves to dangerous work with a sense of moral responsibility as employees of TEPCO, the operator of the plant.

Tanigawa said that some of the workers barely survived the March 11 earthquake and tsunami, then have had to face multiple stresses, deaths of family members and friends, radiation leaks, fires, and hydrogen explosions at the plant.

After examining some 90 TEPCO workers between Saturday and Tuesday, Tanigawa, a professor at Ehime University School of Medicine, said some workers are worried about radiation exposure and its long-term effect on their health, among other concerns.

“Many are complaining of difficulty sleeping and the risks of depression and death from overwork will rise further if this goes on,” the physician told Kyodo News.

Workers other than senior TEPCO officials work four days on and take two days off. During the four-day work period, they are unable to take shower or bathe although they sweat heavily in radiation-protective gear, the doctor said.

After workers are decontaminated at the end of each day, they go to an adjacent plant that is some six miles (10 kilometers) south to sleep on the floor of a gymnasium on mats with blankets and sleeping bags.

Tanigawa said that one of the workers once had to work around the clock without being allowed to go out.

"Being unable to feel refreshed, they are not only vulnerable to various diseases and skin disorders but also may commit errors in their work," Tanigawa told Kyodo News.

Tanigawa said the workers are on a poor diet of canned and packaged food. They used to have only one meal a day until it was recently upgraded to three a day.

Back in late March, three workers at the plant—men in their 20s and 30s—were sent to hospital after being exposed to high-level radiation while laying cable on the first floor and in the basement at the plant’s No. 3 reactor’s turbine building.

TEPCO is also U.S.-made PackBots, tactical mobile robots, to assess areas regarded as too dangerous for humans. No deaths have been directly linked to the nuclear crisis at the Fukushima Daiichi nuclear power plant, although people living near the plant have been evacuated.

Prime Minister Naoto Kan’s government is expected to soon impose an order to prohibit people from entering a 12-mile radius around the plant.

As of 6 p.m. on Wednesday, nearly 28,000 people were either dead or missing in Japan since the disasters. The National Police Agency confirmed that 14,063 had died, and 13,691 were still missing.

Police and soldiers are still going through the ruins of costal villages in search for more bodies.