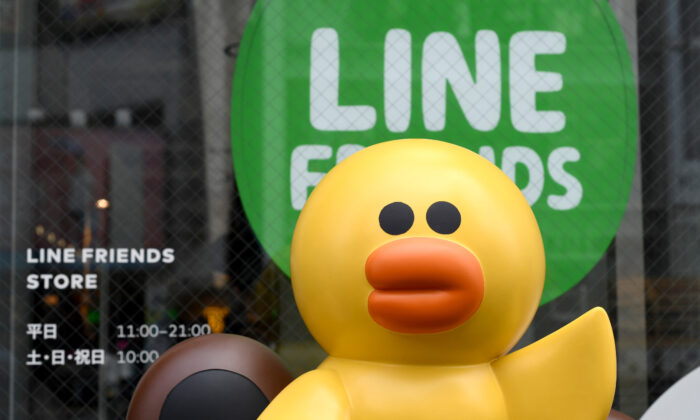 This photo shows Sally, a LINE character, on display at the entrance of the LINE Friends shop in Tokyo's Harajuku district on July 12, 2016. (Toshifumi Kitamura/AFP via Getty Images)
Tech News

The Chinese Communist Party (CCP) has been collecting big data—the new key asset for global power—as part of its intelligence strategy, in its bid to control worldwide information and transactions.

LINE’s parent company, Z-Holdings, released a report on Oct. 18 stating some of the app’s data was handled in China. They hadn’t considered that the regime might access it, and neglected Japan’s economic security, according to The Register.

A Special Advisory Committee on Global Data Governance prepared the report after it was divulged that LINE processed data in China and stored it in South Korea, reported, reported The Register.

Chinese laws dictate that any digital information that a company holds must be turned over to the Chinese regime at its discretion.

The CCP has been gathering data for years, with the purpose of becoming “the world’s biggest source of data and transactions in order to control the rest of the world,” according to James Gorrie, author of “The China Crisis.” “As a world leader in digital technology and digital technology theft, China’s goal is to be the world’s gatekeeper of all data and the ruler of cyberspace.”

Arthur Herman, senior fellow at the Hudson Institute, says data is “the new strategic commodity for global dominance.” Through artificial intelligence, data can be turned into a “coherent picture that can shape strategic and operational plans, and give an antagonist an unseen advantage by sometimes knowing more about his or her opponent than they know themselves,” he wrote in an opinion article for The Epoch Times.

Herman argues that if the CCP is allowed to amass data, it would have a strategic upper hand for the next century. “Add in the possibilities of quantum computing as China’s AI/ML accelerator, and we’re looking at a decisive gain for the Chinese communist regime that will be transformational not only for China but for humanity,” says Herman.
Z-Holdings officially integrated LINE in March 2021. The company also owns Yahoo! Japan.

The company apologizes and says it recognizes the importance of being cautious about handling data that travels abroad, paying attention to other countries’ local laws, as reported by The Register. LINE was also accused of lying to its users about keeping data in Japan, as some of the information is stored in South Korea. The company vowed to be more transparent.

Apart from being a messaging app, LINE also offers a payments service. The app has more than 85 million monthly users in Japan and the local government employs its digital services.

LINE also operates in South Korea, Thailand, Taiwan, and other Asian countries, with a total of 700 million users, though only 150 million actively use the app monthly, according to The Register.