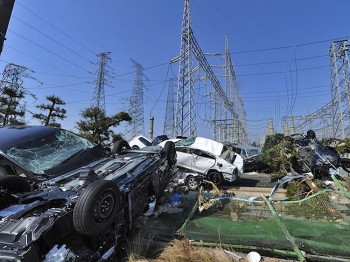 CRIPPLED: Cars smashed by the tsunami sit piled together next to a power grid to the east of Sendai, Japan on March 13, two days after the massive magnitude 9.0 earthquake and tsunami hit the region and crippled the nation's power supply. (Mike Clarke/Getty Images)
Business & Economy

Recent reports have advised that car manufacturers in Japan are planning to halt production on Thursdays and Fridays in July to accommodate the nationwide electricity shortage.

Nissan Motors, for instance, announced that 5,000 staff will work over the weekends to relieve pressure on the Japanese power grid, which has been struggling to keep up due to decreased supply as a result of the damage to Tokyo Electric’s Fukushima nuclear plant, which has been out of action since March 11. Nissan is Japan’s third biggest automaker.

The company’s chief operating officer Toshiyuki Shiga said in a statement, “It is something we must do if there is to be a 15 percent saving on electricity consumption on top of the savings that have already been made, which is what the government is seeking. It is a problem because we face a backlog of orders from the U.S. and Europe following the disruption to the supply chain. So a new Saturday-to-Wednesday regime needs to produce more cars than usual while satisfying the need to cut electricity."

It is hoped that decreasing the strain on the electricity supply during weekday peak times will help compensate for the absence of the Fukushima plant’s nuclear power supply.

Nuclear power constituted around a third of Japan’s electricity supply prior to the March 11 catastrophe.

On a normal basis, there are 56 nuclear Japanese power plants in operation, according to The Guardian, but currently there are only 17 which are being used—with the majority of the others under repair from the recent earthquake and tsunami or are undergoing maintenance.

In addition, any new nuclear plants are unlikely to be operational due to public backlash and the potential threat of disaster.

Analysts are also forecasting price hikes for Japan’s electricity, according to Nikkei News. With the continued shortage of nuclear power, the cost of electricity could climb by up to 18 percent in the next fiscal year, according to research from Japan’s Institute of Energy Economics.

Japan is not alone in the mounting controversy surrounding nuclear power. The nuclear sectors in Germany and France have also undergone increased scrutiny since the Fukushima disaster.