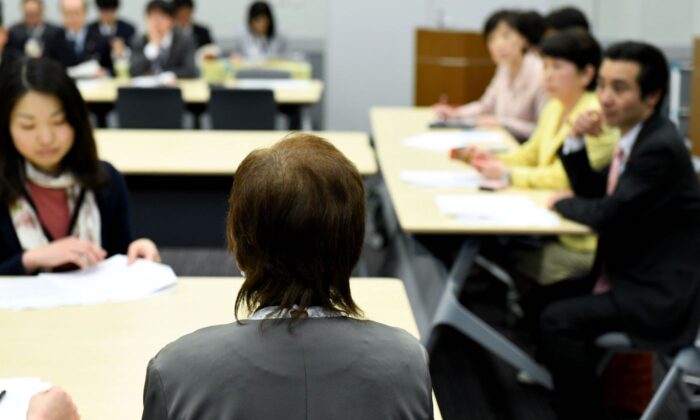 This photo taken on March 29, 2018, shows Junko Iizuka (C), who was sterilized at the age for 16, delivering her message during a meeting with lawmakers in Tokyo. Around 16,500 Japanese were forcibly sterilized under a law in force from 1949 to 1996. (Toshifumi Kitamura/AFP via Getty Images)
Asia & Pacific

A court in Japan has ordered the government to pay 27.5 million yen ($239,000) in damages to three people with disabilities over forced sterilization, after ruling the now-defunct eugenics protection law unconstitutional, local media reported.

The victims sought a total of 55 million yen ($478,000) in damages, but their claims were dismissed in district courts due to the statute of limitations expiring 20 years after they had been forcibly sterilized.

The verdict was overturned by the Osaka High Court on Tuesday, which ruled that the statute of limitations should not be enforced as it “extremely contravenes justice and fairness,” local media Kyodo News reported.

The court concluded in its decision that the victims had difficulty acquiring information due to social prejudice and discrimination, which caused them to take years to initiate the lawsuits.

This is the first time a high court has ruled in favor of victims seeking compensation for forced sterilization.

Chief Cabinet Secretary Hirokazu Matsuno said that the government will review the verdict before deciding whether to file an appeal with the Supreme Court.

Japan’s “eugenics protection law” came into effect in 1948 to prevent the “birth of inferior descendants from the eugenic point of view.”

The law approved sterilization of people with “malformations” and mental illnesses such as schizophrenia, manic-depressive psychosis, epilepsy, and “abnormal sexual desires” without their consent.

In April 2019, Japan’s government passed a law to pay 3.2 million yen ($27,812) in compensation to people who were sterilized without their consent. Victims will have five years to claim compensation, subject to approval by an expert panel.

Former Prime Minister Shinzo Abe also issued a statement apologizing and promising that every effort would be made to eliminate discrimination against the disabled in society.

“During the period the law was in effect, many people were subjected to operations that made them unable to have children based on their having a disability or another chronic illness, causing them great suffering,” he said.