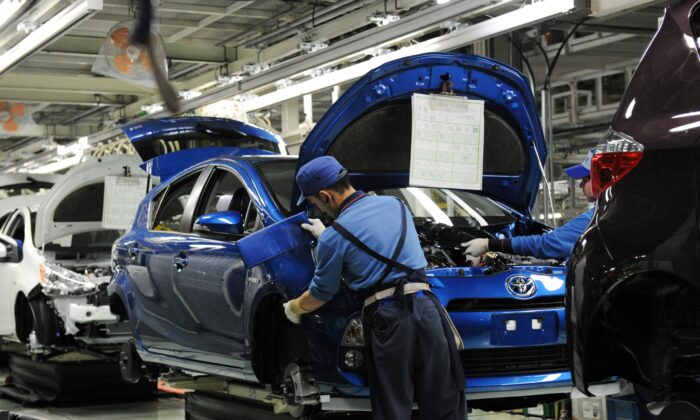 Anne Zhang
Anne Zhang is a writer for The Epoch Times with a focus on China-related topics. She began writing for the Chinese-language edition in 2014.
View profile
Follow
and Ellen Wan

Amid the global chip shortage, Japan’s eight largest automakers’ September domestic output stood at 398,075, falling 49.7 percent compared to the same period last year, the sharpest production decline since the 61.8 percent drop in May last year, according to Chinese state media. Among them, Toyota and Honda dropped more than 55 percent. TSMC’s Japanese subsidiary director said the severe automotive chip shortage would likely continue to next year.

According to Dai-ichi Life Research Institute, a 10 percent reduction in Japan’s annual domestic passenger car production could equate to a $46.8 billion loss in GDP and 44,000 job cuts.

In May of last year, the domestic output of Japan’s eight largest automakers fell by 61.8 percent compared to the previous year, hitting rock bottom. Since then, the production has continued to recover. However, in August and September, the output dropped again due to chip and component shortages. The domestic production of the major automakers has fallen below the previous year’s level for two consecutive months.

Murakami said that Subaru is currently running on a business continuity plan (BCP) to maintain operations. A BCP outlines how a business will continue operating during an unplanned service disruption or a disaster.

The company’s primary focus is working on solving the disrupted supply of parts, said Murakami. Although challenging, it is working to find alternative suppliers in a short timeframe. As for the semiconductor supply, there are really no quick solutions. Chip suppliers are not chip manufacturers, and car companies generally obtain chips through second-hand and third-hand suppliers, but the sources of the chips ultimately come from the same manufacturers.

According to a September forecast from AlixPartners, an American consulting firm, the semiconductor chip shortage is now expected to cost the global automotive industry $210 billion in revenue in 2021, with no end in sight, almost doubling its previous projection of $110 billion in May.

In May, the Delta variant of the CCP virus broke out in Southeast Asian countries such as Malaysia and Vietnam, causing the automotive parts supply to stagnate. In September, AlixPartners forecasted that automakers worldwide would lose 7.7 million production units in 2021, much higher than its previous forecast of 3.9 million units in May.

Automakers worldwide, including Ford and General Motors, had warned of massive earnings cuts this year due to the chip shortage. However, strong consumer demand and higher profits from record vehicle prices have offset some of the losses.

TSMC’s Japanese subsidiary director Makoto Onodera said at an automotive technology exhibition in Nagoya on Oct. 27 that the global automotive semiconductor shortage “will remain serious in 2022.”

According to Onodera, the turnaround time for chips is about half a year from the ordering date, and the supply and demand remain cumbersome. While the chip supply remains short, TSMC, on Oct. 14, announced plans to build a new manufacturing plant in Japan.

After attending the United States Department of Commerce’s Semiconductor Video Summit on May 21, Mark Liu, executive chairman of TSMC, said it has increased automotive chip production by 60 percent over last year’s levels.

However, in a September interview with Time Magazine, Liu suggested that someone in the supply chain was stockpiling chips. He said amid the global chip shortage, more chips were being sent to factories than were leaving them in products, which means that “there are people definitely accumulating chips who-knows-where in the supply chain.”

“We are learning too because we didn’t have to do this before,” Liu said as he ordered his team to triangulate different data points to decipher which customers were truly in need and which were stockpiling.

William Wang contributed to this report.