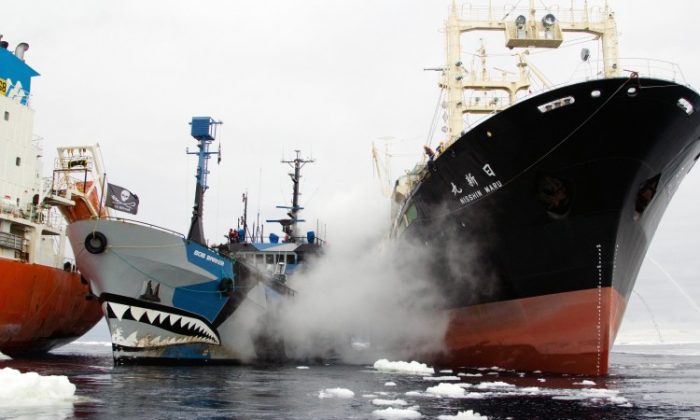 Tensions have peaked over the past week between a Japanese whaling fleet in Antarctic seas and the Australia-based Sea Shepherd Conservation Society. An armed vessel believed by Sea Shepherd to be a Japanese military ship has now entered international Antarctic waters to join the fleet.

Whaling is restricted in waters below latitude 60 degrees south, and the fleet is now past 65 degrees, reported Sea Shepherd, which has three vessels closely monitoring the fleet.

Since Sea Shepherd cut the fleet off from its fuel tanker, the Sun Laurel, last week in an attempt to disrupt the hunt, the fleet has become desperate to refuel. A whaling ship in the fleet, Nisshin Maru, butted against a Sea Shepherd vessel last week in what the group believes was a hostile move to scare it off.

Now, the Sun Laurel is traveling at a fast speed close to icebergs, late at night, and without searchlights on—a move that the group believes endangers not only that ship but also protected wildlife.

“There is a great deal of wildlife—penguins, seals, as well as whales—in this fragile region,” said former Australian Senator and Sea Shepherd co-campaign leader Bob Brown in a telephone interview.

The armed ship, the Shirase, which is much larger than the whaling vessels, has also arrived.

“I have no doubt that the Japanese will say it’s a research vessel,” Brown said, “but that’s the lie they use for killing whales.”

The Epoch Times is waiting for a response to an inquiry sent to the Japanese government.

An International Fund for Animal Welfare (IFAW) report published last month showed that the Japanese whaling industry is operating at a loss and is highly subsidized by the Japanese government.

However, the Japanese prime minister has committed to whaling for the next two years at least, according to Brown.

“It makes no economical sense,” he said. “Much like loggers never want to stop destroying the redwood forest—they have the equipment, and they just want to keep going.”

Whalers aim for 900–1,000 whales in a season, but will only end with about 100 this year, said Brown. The Japanese Ministry of Agriculture, Forestry and Fisheries has not yet confirmed these figures.

With 5,000 tons of stockpiled whale meat they cannot unload, it does not make much of a difference, according to Brown.

When the whaling industry shut down in Australia in 1978, the same arguments arose: the need for jobs and the need to keep alive a traditional industry.

“But that was all bunkum,” Brown said.

Sea Shepherd notified the Australian government of the alleged Japanese military presence in the Antarctic seas, but the group is not hopeful that the government will act.

Shipping expert for the Antarctic and Southern Ocean Coalition Siam Prior said Australia would be the best option for a governing body to act on this situation—but he shares Sea Shepherd’s doubts that it will do so.

The United Nations International Maritime Organization (IMO) is responsible for unsafe vessel management practices and international shipping, explained Prior in an email.

“However, what action they [IMO] would take is questionable (especially on the wildlife grounds as this is not their remit), as they are not an enforcement body,” wrote Prior. “As a result, Australia would be the best placed government—since the vessel is within Australia’s maritime search and rescue area, but again it would be difficult for Australia to take much action—they would need to approach Japan.”

In the meantime, Brown said, “Sea Shepherd will not be intimidated.”

The group has three vessels—the Sam Simon, the Steve Irwin, and the Bob Barker—currently on watch and ready to intercede should the fleet attempt refueling again in an attempt to continue through the last few weeks of the hunting season.