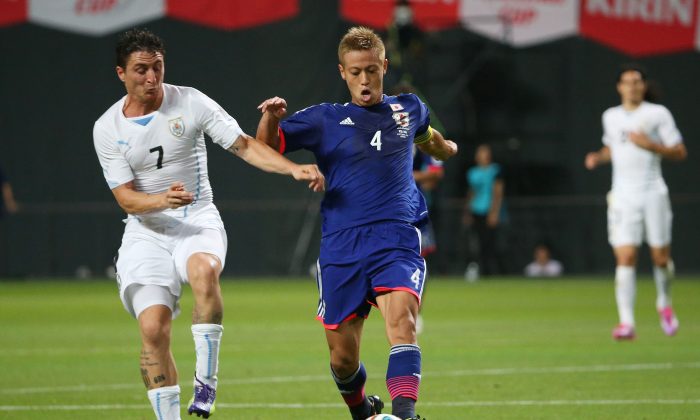 Keisuke Honda (R) of Japan and Cristian Rodriguez (L) of Uruguay compete for the ball during the KIRIN CHALLENGE CUP 2014 international friendly match between Japan and Uruguay at Sapporo Dome on September 5, 2014 in Sapporo, Japan. (Photo by Atsushi Tomura/Getty Images)
Asia & Pacific

Japan and Venezuela are set to play in an international friendly match on Tuesday, September 9.

The game will also air on ESPN3 and ESPN Deportes in the United States.

Japan are 5/6 to win the match, as compared to 4/1 for Venezuela, according to OddsChecker.

MANCHESTER, England—Sepp Blatter will run for a fifth, four-year term as FIFA president.

Buoyed by a successful World Cup in Brazil and UEFA President Michel Platini opting not to stand in next year’s election, the 78-year-old Blatter believes he has the backing to win again.

In response to FIFA’s worst corruption scandals, Blatter had pledged before his re-election in 2011 that his current term would be his last. But the Swiss official, who took over as FIFA president in 1998, has been edging toward another run ever since, with no major rival emerging to challenge him.

Despite ongoing corruption scandals engulfing FIFA and opposition within UEFA, Blatter appears to have retained the support of most national federations. Victory in the May election would extend Blatter’s mandate to a 21st year in 2019 when he would be 83.

“A mission is never finished, and my mission is not finished,” said Blatter, who has previously stopped short of confirming his candidacy. “I got (from) the last congress in Sao Paulo not only the impression but the support of the majority, a huge majority of national associations asking ‘Please go on, be our president also in future.'”

Any potential challengers must have worked in football for at least two of the last five years, and have until late January to gather the support of at least five national associations. The secret ballot is scheduled for May 29 in Zurich, and former FIFA international relations director Jerome Champagne is the only other person to say he will stand.

FIFA does not have term limits, but FIFA Vice President Prince Ali bin Al-Hussein of Jordan is for them.

“It’s always good to have new ideas, new opinions and new blood,” Prince Ali said Monday at SoccerEx. “I do believe in term limits. You serve the time you have and that’s that. I think people would much happier knowing, even as people to aspire to a position, when they end.”

FIFA, though, still struggles with corruption scandals discrediting many former executive committee members. Blatter, however, has emerged largely unscathed — despite often being booed when he faces fans at major matches.

“(I) just ask for a little bit more respect and fair play and perhaps also the truth, although this is not so easy because it is not such good information,” Blatter said. “If you ask me how I deal with that, at the beginning it was very heavy and I was suffering.

“But now my situation has been cleared and cleaned by all possible means outside of FIFA, inside of FIFA. So therefore I am confident and I am going forward as an optimist.”

FIFA faces a turbulent future as it deals with the fallout from awarding the 2018 World Cup to Russia and the 2022 tournament to Qatar. FIFA last week received three reports from ethics investigator Michael Garcia and his team after their year-long probe of alleged corruption in the bidding contests.

If the Middle East’s first World Cup is not taken from Qatar, FIFA must determine how the event can be moved from the summer heat. Blatter canceled a planned visit to SoccerEx in Manchester to stay in Zurich, where football leaders were meeting Monday to discuss the potential disruption to the international calendar caused by starting the 2022 World Cup in January or November.

“We have already said we cannot play in summer in this heat in Qatar, then we have to play in winter,” Blatter said. “Now we are making this consultation.”

The more pressing challenge is resisting calls from some British and German politicians to take the World Cup from Russia or boycott the tournament as punishment for President Vladimir Putin’s intervention in Ukraine.

“A boycott in sport never has had any benefit,” Blatter said. “Let us wait and see the geo-political situation andFIFA shall not intervene with politics. But for the time being we are working with Russia.”

Looking further ahead, Blatter offered encouragement for a bid by the United States or Canada for the 2026 World Cup

“If you look at the rotation of the World Cup then it should go back to Africa or go to the Americas,” Blatter said. “As we have been in South America, I think North America has a better chance than South America …. perhaps there’s a big commercial opportunity arising now in the United States because of the tremendous television audiences that are booming and that the World Cup has also encouraged in its domestic game as well.

“We did well with football when it first went to the United States but the opportunities are bigger now.”