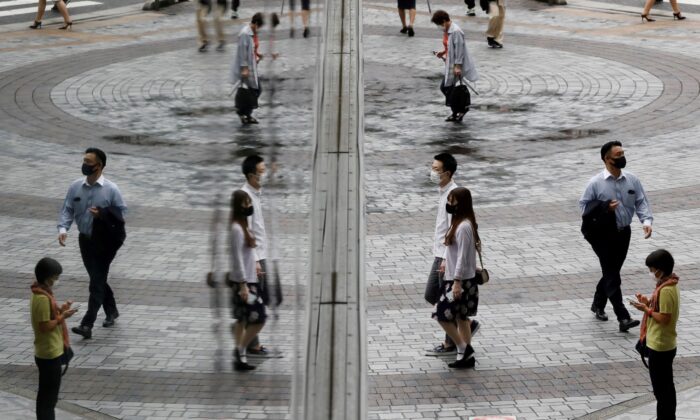 People wearing protective masks amid the COVID-19 outbreak, make their way at a shopping district in Tokyo, Japan on Sept. 9, 2021. (Kim Kyung-Hoon/TPX images of the day via Reuters)
WORLD

Japan will begin vaccinating children aged 5 to 11 in some areas this month, local media reported Monday, amid the increasing number of COVID-19 cases in the country.

Vaccine distribution to municipalities and medical facilities will begin this week, with about 12 million doses of vaccine expected to be delivered nationwide by May, national broadcaster NHK reported.

Children aged 5 to 11 will receive one-third the amount a 12-year-old would get, with two jabs given three weeks apart. NHK stated that vaccination of children would be permitted only with the consent of their parents.

The vaccine can only be supplied on an individual basis through vaccination sites in their municipalities or clinics. Japan’s Health Ministry opposed mass vaccinations at schools, citing concerns that students would face peer pressure to receive the vaccine.

Children with respiratory and underlying health problems are especially recommended to get the vaccine because of their increased risk of experiencing severe symptoms of the CCP (Chinese Communist Party) virus, commonly known as the novel coronavirus.

Pfizer Japan said that the ministry approved its vaccine for use in children aged 5 to 11 last month.

The Food and Drug Administration (FDA) of the United States also approved the emergency use of a smaller dose of Pfizer’s vaccine for children aged 5 to 11 last year, stating that the vaccine was 90.7 percent effective at preventing children from contracting the virus.

The FDA had also planned to make a decision on Pfizer’s vaccination for children under the age of five, but the meeting was postponed due to the need for additional data.

“We believe additional information regarding the ongoing evaluation of a third dose should be considered as part of our decision-making for potential authorization,” the agency stated.

It stated that pills distribution will begin on Feb. 14, with just 2,000 medical institutions nationwide permitted to prescribe Paxlovid in-hospital until at least Feb. 27, due to concerns over the pill’s compatibility with other kinds of drugs.

Pfizer Japan stated that Paxlovid is to be used for people age 12 and older, who weigh at least 40 kilograms (88 pounds) and are at high risk for progression to severe infection, including hospitalization.

Japan recorded 71,423 new coronavirus cases on Sunday, down from the 81,576 cases on the previous day, according to the government’s data.