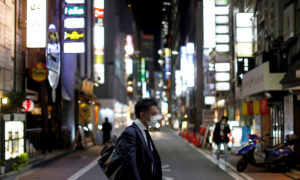 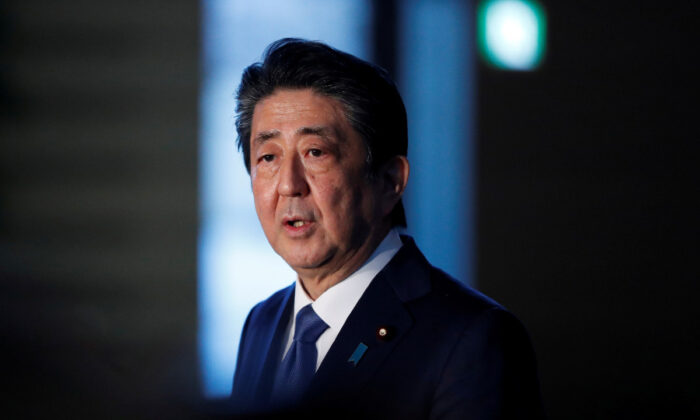 Japan's Prime Minister Shinzo Abe speaks to the media on Japan's response to the CCP virus outbreak, at his official residence in Tokyo, Japan, on April 6, 2020. (Issei Kato/Reuters)
Asia & Pacific

TOKYO—Japan is to impose a state of emergency in Tokyo and six other prefectures as early as Tuesday to contain the CCP (Chinese Communist Party) virus, commonly known as novel coronavirus, while the government prepares a $990 billion (108 trillion yen) stimulus package to soften the economic blow.

Domestic infections topped 4,000, Jiji news reported, and 93 have died—not a huge outbreak compared with some global hot spots. But the numbers keep rising, with particular alarm over the spread in Tokyo, which has more than 1,000 cases including 83 new ones on Monday.

“Japan won’t, and doesn’t need, to take lockdown steps like those overseas,” Prime Minister Shinzo Abe told reporters, citing the opinion of infectious disease experts. “Trains will be running and supermarkets will be open. The state of emergency will allow us to strengthen current steps to prevent an increase in infections while ensuring that economic activity is sustained as much as possible,” he said.

An emergency, which Abe said would last about a month, will give governors the authority to call on people to stay at home and businesses to close. With no penalties for ignoring the requests in most cases, enforcement will rely more on peer pressure and respect for authority and was unlikely to be as rigorous as lockdowns in many other countries.

In a sign that corporate Japan already was heeding the call, Canon Inc. announced it would close its Tokyo headquarters for 10 days starting from Tuesday.

Pressure had been mounting on the government to take the step although Abe had voiced concern about being too hasty, given the restrictions on movement and businesses it would entail.

Abe also said the government will launch a stimulus package of about $990 billion (108 trillion yen), including more than $55 billion (6 trillion yen) for cash payouts to households and small businesses and $239 billion (26 trillion yen) to allow deferred social security and tax payments.

It was not immediately clear how much of that package would be new government spending.

An emergency appears to have public support. In a poll published on Monday by JNN, run by broadcaster TBS, 80 percent of those surveyed said Abe should declare it while 12 percent said it was not necessary. His approval rating fell by 5.7 points from last month to 43.2 percent, the survey showed.

But Kenji Shibuya, director of the Institute for Public Health at King’s College, London, said the emergency was too late given the explosive increase in cases in Tokyo.

“It should have been declared by April 1 at the latest,” he said.

Click https://graphics.reuters.com/CHINA-HEALTH-MAP/0100B59S39E/index.html for a GRAPHIC tracking the global spread of the coronavirus

Under a law revised in March to cover the CCP virus, the prime minister can declare a state of emergency if the disease poses a “grave danger” to lives and if its rapid spread could have a big impact on the economy.

Abe must seek formal advice from a panel of experts before deciding to go ahead and declare the emergency.

While Japan’s CCP virus epidemic is dwarfed by the 335,000 infections and more than 9,500 deaths in the United States alone, experts worry a sudden surge could overwhelm Japan’s medical system.

Sounding an alarm over the high rate of cases that could not be traced, Tokyo Governor Yuriko Koike indicated last week that she would favor a state of emergency as a way to help her urge residents to abide by stronger social-distancing measures.

The emergency measures are meant to reduce social activity by 80 percent, a critical degree to curtail infections, said Koji Wada, a member of the expert panel advising policymakers. The government must show “guts” in leveling with the public, with Abe being specific in his declaration about how people should conduct daily life.

“It really depends on the speech by Prime Minister Abe,” said Wada, a professor at the International University of Health and Welfare in Tokyo. “I really expect him to tell us what kind of activities we should do.”

By Linda Sieg and Chang-Ran Kim