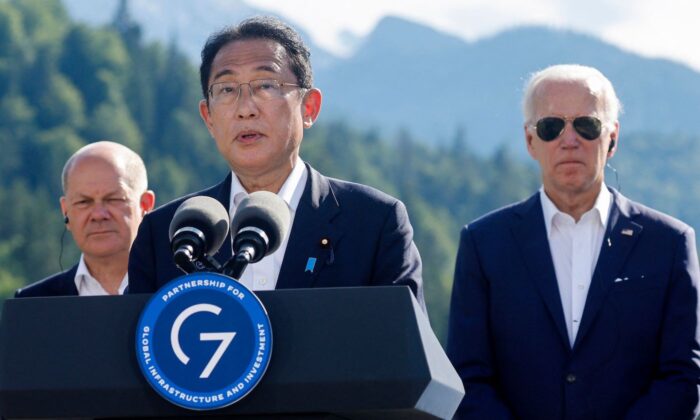 Japan to Cap Russian Oil at Half Current Price: Kishida

Japan will impose a cap on the purchase price of Russian oil by lowering it in half, in tandem with the Group of Seven (G-7) nations’ campaign against Russia’s invasion of Ukraine, Prime Minister Fumio Kishida said on Sunday.

Kishida said the Japanese government would establish a mechanism to ensure that Russian oil “will not and cannot be bought at a higher price” than the cap, Kyodo News reported.

“We are facing a grave situation in which the order of peace is being shaken. We must show that aggression comes with a heavy price,” he said, without specifying on when the price cap on Russian oil will be enforced.

Kishida made the announcement ahead of Japan’s upper house election on July 10, in which his party is poised to retain the majority.

His remarks followed the joint communique issued by the G-7 nations on June 28, which outlines the group’s intention to increase sanctions to “prevent Russia from profiting from its war of aggression” in Ukraine.

The G-7 stated that among options under consideration include “a possible comprehensive prohibition of all services” linked to the transportation of Russian seaborne crude oil and petroleum products globally.

This is “unless the oil is purchased at or below a price to be agreed in consultation with international partners,” according to the communique.

“We invite all like-minded countries to consider joining us in our actions,” said the G-7 leaders from the United States, Canada, Germany, Italy, Japan, and the European Union.

The ruling Liberal Democratic Party, led by Kishida, seeks to retain a majority in the upper house for its government for the next three years. Opposition parties have criticized the government for the rising inflation and weakening yen.

“To protect your livelihoods and work, the government will take full responsibility and do its utmost to take measures against price increases,” he said at a policy debate on June 25.

The yen fell to a 24-year-low against the U.S. dollar last month. But Kishida maintained his support for the Bank of Japan’s ultra-loose monetary policy, which opponents argued could hasten the depreciation of the yen and increase the cost of imports.