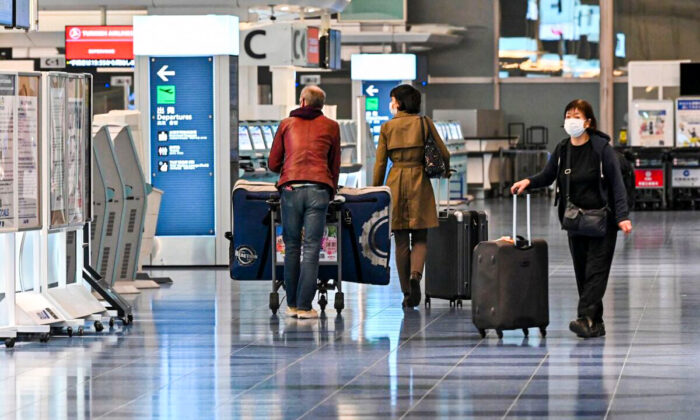 Japan to Allow Entry of Tour Groups From 98 Countries and Regions, Including United States

Japan will ease border control measures and resume accepting foreign tourists from 98 countries and regions on June 10, but only for package tours, the Foreign Ministry said on Thursday.

The government will ease border control measures for countries classified as having the lowest risk of COVID-19, including the United States, Australia, the United Kingdom, South Korea, and China.

But it stated that Japan will only accept visitors on escorted package tours for the time being.

“On the whole, the world is seeing a downward trend in the number of new infection cases and deaths, and the risk of suffering severe symptoms and deaths has been seen receding,” it stated, according to Kyodo News.

Visitors from low-risk countries, designated as “blue,” will be exempt from a COVID-19 test and quarantine requirements regardless of vaccination status. But they must provide a negative test result before departing to Japan.

On Tuesday, seven travelers from the United States arrived in Japan on the government’s first small-scale test tours, which aimed at assessing the feasibility of reopening borders to inbound tourists, according to local reports.

The move follows Prime Minister Fumio Kishida’s goal to implement an entry process similar to that of other Group of Seven (G7) developed economies nations.

“We have now eased border control measures significantly, with the next easing taking place in June, when Japan will introduce a smoother entry process similar to that of other G7 members,” Kishida told reporters in London on May 5.

Kishida also described Japan’s COVID-19 response as “one of the most successful in the world,” saying that the strict measures have allowed the government to fortify its healthcare system and increase vaccination rates.

Japan received more than 30 million inbound tourists in 2018, but that number plummeted to 250,000 in 2021 when the government closed its borders to prevent the spread of the Omicron variant and adopted the strictest border control procedures among G7 nations.