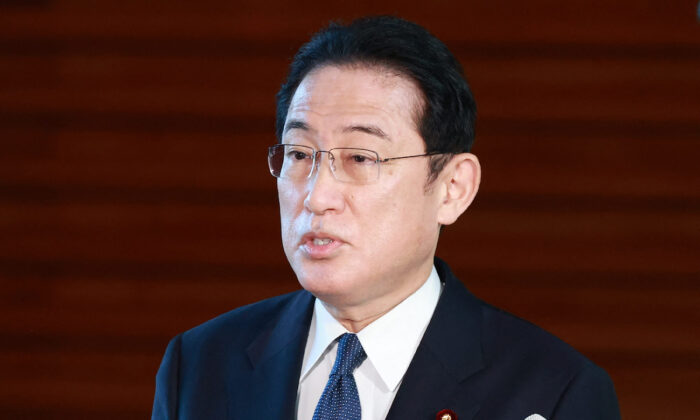 Japan's Prime Minister Fumio Kishida speaks to the media about the crisis between Russia and Ukraine, at the prime minister's office in Tokyo, on Feb. 22, 2022. (STR/JIJI PRESS/AFP via Getty Images)
WORLD

Japan will begin lifting its border control measures in June and implement an entry process similar to that of other Group of Seven (G7) developed economies nations, Prime Minister Fumio Kishida said Thursday.

Kishida spoke at a press conference in London after his meeting with British Prime Minister Boris Johnson on global security and strengthening bilateral ties.

In his speech, Kishida said that Japan’s COVID-19 response was “one of the most successful in the world,” which has allowed the government to fortify its health care system and increase vaccination rates.

“We have now eased border control measures significantly, with the next easing taking place in June, when Japan will introduce a smoother entry process similar to that of other G7 members,” he said, without going into detail.

Japan had banned new arrivals of foreign visitors since November 2021 to contain the spread of the Omicron variant and adopted the strictest border control measures among the G7 nations.

The Immigration Services Agency of Japan claimed that more than 400,000 people eligible for visas had been denied entry into the country as of January 4. Of those, about 152,900 were students pursuing study in Japan.

Japan has gradually lifted its entry ban on foreign students and business travelers and raised the maximum daily number of entrants to 10,000 in April, but foreign tourists remain barred from entering the country, according to local reports.

“Reflecting on the steps to bolster the quarantine structure as well as the implementation of infection-prevention measures, we decided to review the daily quota to respond to the needs of those trying to enter, including Japanese nationals as well as foreign students,” chief cabinet secretary Hirokazu Matsuno said on April 2.

Matsuno added that the government will “gradually increase the coming and going of visitors from overseas.”

According to the Foreign Ministry, all entrants would be subject to a 7-day home quarantine, but the quarantine requirement may be lifted if the third-day test result comes out negative.

It stated that travelers who have completed their third vaccination shots and are arriving from countries where the outbreak is under control could be exempted from quarantine.

Japan had also ended the most recent COVID-19 quasi-state of emergency in 18 prefectures on March 21, following a decrease in the number of new infections. The country reported 20,779 new cases on Thursday, a decrease from the previous week’s level of 41,750.