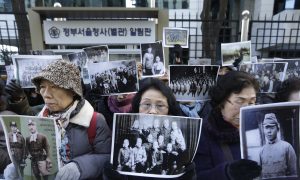 South Korean former "comfort women" Kim Bok-Dong (L) and Gil Won-Ok (R), who were forced to serve as sex slaves for Japanese troops during World War II, attend a protest with other supporters to demand Tokyo's apology for forcing women into military brothels during World War II outside the Japanese embassy in Seoul on August 12, 2015. Close to 1,000 protestors had gathered outside the embassy ahead of the 70th anniversary of the end of Japan's 1910-45 colonial rule over the Korean peninsula. AFP PHOTO / JUNG YEON-JE (Photo credit should read JUNG YEON-JE/AFP/Getty Images)
Asia & Pacific

Japan says it has found no evidence its World War II government and military forcibly rounded up women to be sex slaves, Tokyo has told a UN committee, the latest pronouncement in a corrosive row over interpretations of history.

The confirmation, ahead of a conference on women later this month, is likely to renew anger among the dwindling number of surviving former “comfort women”, who say the country has never taken full responsibility for what it did in wartime.

It could also further complicate a troubled deal between Tokyo and Seoul sealed in late December—one their top diplomats called “final and irreversible”—but which has sparked anger among former South Korean comfort women and their supporters.

Up to 200,000 women are estimated to have been forced to provide sex to Japanese soldiers during World War II.

Up to 200,000 women, many of them South Koreans but also from China, the Philippines, and what is now Indonesia, are estimated to have been forced to provide sex to Japanese soldiers during World War II.

Tokyo has offered repeated apologies over the issue, and says that while there was military involvement in the establishment of “comfort stations”, there is no evidence its officials were involved in the abduction of women for the purpose.

It says private brokers were responsible in some cases, and in others, the women were common prostitutes.

In a report submitted to the committee in December and posted on its website, Japan said it carried out a “full-scale fact-finding study” by investigating documents and interviewing people including former military officials since the early 1990s.

“‘Forceful taking away’ of comfort women by the military and government authorities could not be confirmed in any of the documents that the GOJ [government of Japan] was able to identify,” it said in a report dated December 8th.

“The Japanese delegation will explain our position” on that and other women’s issues at the Geneva conference that begins on February 15th, a foreign ministry official in charge of gender issues told AFP, declining to give her name.

The UN-sponsored conference is part of the ongoing Convention on the Elimination of All Forms of Discrimination against Women.

The plight of the women is a hugely emotional issue that has for decades marred ties between Seoul and Tokyo, which ruled the Korean peninsula as a colony from 1910 to 1945.

Under the late December deal Japan offered an offered an apology and a 1 billion yen (£5.9 million) payment to the surviving South Korean women.

But it immediately sparked an angry reaction from some of the women and South Korean activists, who take issue with Japan’s refusal to accept formal legal responsibility.

They also have bitterly complained that neither Seoul nor Tokyo consulted the women about the agreement before concluding it.

While most mainstream Japanese accept national guilt over historic atrocities, a vocal right wing minority say the country has been unfairly maligned for behaviour they claim was common in conflict.