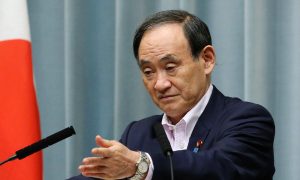 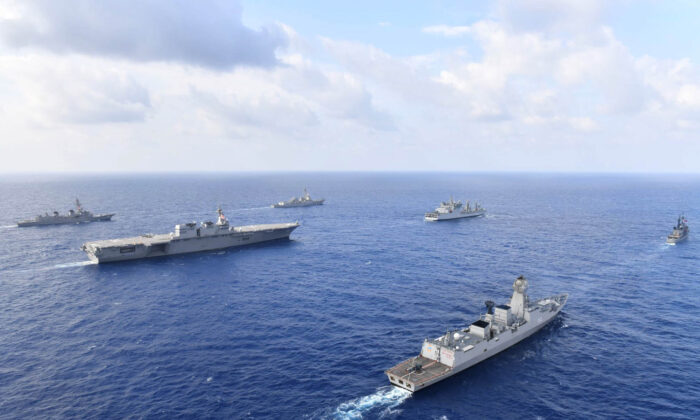 Naval vessels from the United States, Japan, India, and the Philippines conduct formation exercises and communication drills in the South China Sea in May 2019. (Japan Maritime Self-Defense Force/U.S. Navy)
Thinking About China

Change comes slowly in Japan—especially when it involves national defense. But sometimes, something happens that causes one to raise an eyebrow.

This was a first—and an eyebrow-raiser.

The following commentary discusses the significance of the talks and possible future developments in the Japan–Taiwan defense relationship.

How Important Are Japan–Taiwan Security Talks?

The fact those talks took place is important in its own right. Japan is showing a backbone, as such talks would have been unthinkable five years ago. Tokyo has had basically no security relationship with Taiwan—for fear of angering China. But now, Japanese LDP politicians are meeting (even if virtually) with Taiwanese counterparts to talk security and national defense. And the Japanese government was very public about it and made no effort to hide or to downplay the talks.

Also, there was no public opposition in Japan. Indeed, earlier opinion polling on regional defense topics (including Taiwan and China) suggests that the Japanese public would regard the Japan–Taiwan talks as necessary, if not commonsensical.

But might one say that “it’s just a couple of LDP politicians” and not real diplomats talking? That’s true. But they still had approval from the Suga administration and the Ministry of Foreign Affairs, which has always had a “pro-China” faction. And Japanese industry and business interests—notoriously willing to placate China to assure market access—couldn’t stop the talks either. In fact, there are signs that Japanese officials might be prioritizing security interests over economic and commercial interests.

What’s Motivating the Japanese Side?

Japan is afraid. And at long last, there’s a broad enough realization in official and political circles that Taiwan’s defense is Japan’s defense. If Taiwan comes under Chinese control, Japan’s defenses will be “outflanked.” And China’s naval and air forces operating from Taiwan will be able to cover Japan’s eastern approaches—effectively surrounding Japan.

Also, Chinese forces can cut the South China Sea sea lanes through which much of Japan’s commercial traffic (including energy supplies) flows. In early September, Beijing announced that certain classes of foreign ships entering Chinese waters will come under direct Chinese supervision. Beijing claims most of the South China Sea (and the East China Sea) as its own. And one day, Beijing will enforce the “law”—as Tokyo well knows.

Many in Japan (especially in military and defense circles) have long understood Taiwan’s importance, but now the threat to Japan is so widely recognized that it can’t be avoided or ignored—even if that’s the preference of Japanese officials for handling difficult issues.

Japan also realizes that if the United States steps in to help Taiwan in the event of a Chinese attack, the U.S. bases in Japan will be targeted. So one way or another, Japan will be involved in the fight.

Is this “leaning” toward Taiwan by Japan likely to be a long-term thing?

Taiwan President Tsai Ing-wen called for a security relationship with Japan a couple of years ago. That idea went nowhere, owing to Japanese reluctance. However, now we might have seen the first step toward that end. The LDP and DPP politicians agreed to hold regular talks going forward. Regular government-to-government security discussions are a logical next step.

The Japanese also have a visceral sense of the danger from China that always sits in Japanese psyches, which comes from 2,000 years of history and being close neighbors. And Japan isn’t psychologically able to accept a “lesser” role in the Japan–China relationship—at least not voluntarily.

How could a Japan–Taiwan defense relationship play out in the near future?

There’s plenty of potential regarding how that relationship progresses. It just takes a little imagination and nerve on Japan’s part.

At this point, Japan is probably thinking about how it can do something that “sends a message” but doesn’t go “too far.” However, Japan is also looking to see what the United States does toward Taiwan and will likely calibrate and act accordingly.

The most likely Japan–Taiwan military cooperation in the near term is to exchange “liaison officers” (in other words, defense attachés) and also have defense officials—uniformed and civilian—hold meetings on different topics, such as intelligence sharing. We might also see Taiwan military officers invited to attend events, schools, and courses in Japan and vice versa.

The idea of Taiwan Navy ships and the Japan Maritime Self-Defense Force or the Taiwan Air Force and the Japan Air Self-Defense Force brushing elbows operationally perhaps isn’t for the immediate future. But if the United States takes the lead and “breaks the ice” by ending 40 years of isolating the Taiwan military, Japan just might join in as well.

And if the Chinese keep scaring the hell out of everyone, it’s more likely that the Japanese will be moved to act faster than currently imagined—even without seeking U.S. approval. It often takes a crisis to motivate Japan—and China is fast becoming such a crisis.

HADR Cooperation Between Japan and Taiwan?

One announced outcome of the Aug. 27 meetings was to have Japanese and Taiwanese coast guards cooperate on humanitarian assistance and disaster relief (HADR).

That’s a good idea and a useful starting point.

One would have to be exceedingly churlish to object to the idea of saving lives—as Beijing no doubt will.

HADR training and response has a practical real-world applicability, and in Taiwan and surrounding areas, there’s no shortage of natural disasters every year. Japan and Taiwan can start with planning meetings, then move to tabletop exercises, field exercises, and actual bilateral and multilateral responses to actual disasters.

Bringing the U.S. Coast Guard into this initiative from the start is a good idea—for political purposes as well as for the resources and expertise that the United States can add.

But at some point, the respective militaries will need to join the mix. The militaries are the ones that actually conduct HADR operations. Coast Guards can do some limited humanitarian relief activities, but not the full-blown HADR operations needed after a tsunami or a typhoon.

HADR is a good way to work up to military-to-military cooperation—involving Taiwan, Japan, the United States, and other free nations.

Overall, the recent talks potentially open many doors. Taiwan is willing. It’s up to Japan to move things along. Hopefully, they will. And the United States should help them out, if needed.

Will Japan’s policy toward Taiwan and China change after a new prime minister is selected?

Not if the prime minister is from the LDP. But if the opposition somehow wins, things will get interesting. The Japanese opposition has its share of China “accommodationists” who are eager to try policies that have already failed repeatedly. And Beijing might also be tempted to test a new administration in Tokyo.