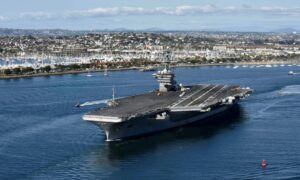 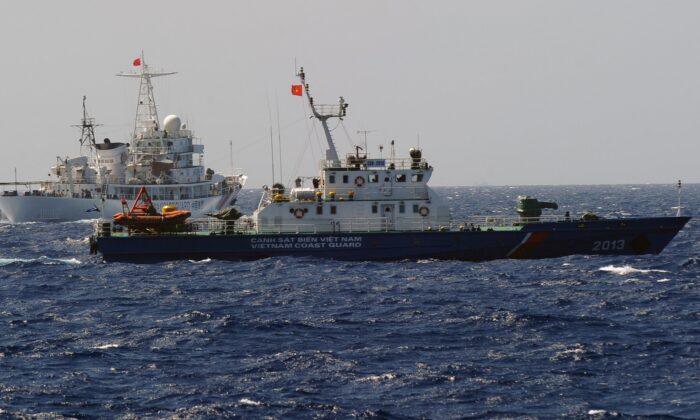 This picture taken from a Vietnam Coast Guard ship on May 14, 2014 shows a China Coast Guard ship (L) chasing a Vietnam Coast Guard vessel near the site of a Chinese oil drilling rig being installed at the disputed water in the South China Sea off Vietnam's central coast. The Vietnam National Assembly's deputies, gathered for their summer session, are discussing the escalating tensions with China over the South China Sea's contested waters. (HOANG DINH NAM/AFP via Getty Images)
Asia & Pacific

On Sept. 11, Japan and Vietnam signed a deal, enabling exports of Japanese defense equipment, vessels, and technologies to Vietnam. The deal aims to strengthen cooperation in defending against China’s expanding military presence in the Southeast Asia regional waters.

The deal was signed in Hanoi, the capital of Vietnam, during Japanese Defense Minister Nobuo Kishi’s first overseas visit after assuming office. Kishi said that the accord signed on Sept. 11 had raised the defense partnership between the two countries to a new level.

After the signing, the Japan Ministry of Defense stated that the transfer details of specific equipment, including naval vessels, will be determined in subsequent talks.

On Aug. 24, two weeks before Japan and Vietnam reached an agreement, United States Vice President Kamala Harris visited Vietnam to strengthen relations with the South China Sea coastal country. During the visit, Harris urged all countries to stand up to the Chinese Communist Party’s (CCP) expansion in the South China Sea.

One week later, on Sept. 3 and 4, Chinese Foreign Minister Wang Yi visited Vietnam. At the end of his visit, Wang said that China and Vietnam should avoid any unilateral actions on the South China Sea issue that may complicate the situation and widen their differences.

Both Vietnam and China have sovereignty claims in the South China Sea, especially of the Nansha Islands and Paracel Islands, where the two countries have territorial disputes.

On Sept. 11, a few days after Wang Yi concluded his visit to Vietnam, Japan’s Defense Minister Nobuo Kishi met with Vietnam’s Foreign Minister Pan Van Giang in Hanoi. Kishi and Pan agreed that maintaining the freedom of navigation and flight in the Indo-Pacific region, as well as cybersecurity and other defense partnerships, is of great significance, and reiterated the need to comply with international law, including the 1982 United Nations Convention on the Law of the Sea (UNCLOS).

The Japan Ministry of Defense stated that the CCP has taken increasingly provocative actions in the disputed waters of the South China Sea and strongly condemned any unilateral attempts to coerce the status quo or any activities that increase tensions.

There are also territorial disputes between Japan and China. Japan often protests the activities of the Chinese Coast Guard near the Senkaku Islands that are controlled by Japan in the East China Sea. Japanese officials said that Chinese ships repeatedly violate Japanese territorial waters around the islands and even threaten their fishing boats.

During the Cold War, as a member of the Communist camp, Vietnam relied on the Soviet Union for its weapons, including fighter jets, submarines, and other major military equipment.

Japan is seeking military cooperation with more allies besides the United States. The signing of the defense equipment and technology transfer agreement made Vietnam the eleventh country to sign a deal with Japan. To date, Japan has signed similar agreements with the United Kingdom, Australia, the Philippines, and Indonesia.