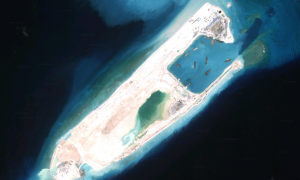 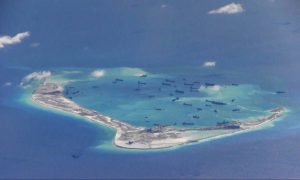 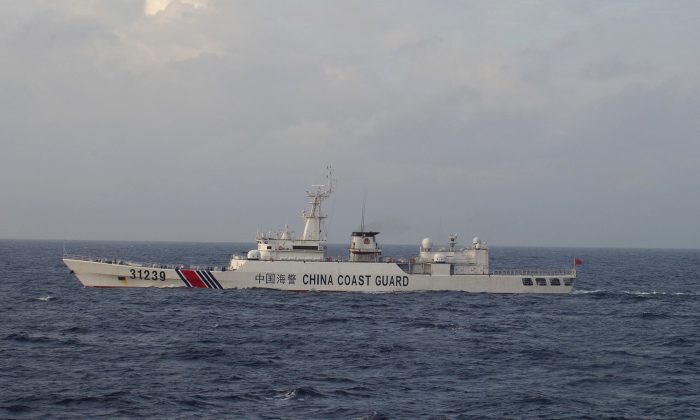 In this photo provided by Japan Coast Guard, an armed Chinese coast guard ship sails in the water near islands, known as the Senkaku in Japanese and the Diaoyu in Chinese, Tuesday, Dec. 22, 2015. (Japan Coast Guard via AP)
China

TOKYO—Japan said it spotted for the first time Tuesday an armed Chinese coast guard ship near islands at the center of a long-running territorial dispute between the two Asian giants.

Chinese ships regularly sail around the uninhabited islands, known as the Senkaku in Japanese and the Diaoyu in Chinese, but a Japanese coast guard spokesman said an armed Chinese coast guard vessel had never been sighted before in the area.

The incident is likely to fuel concern in Japan that China may be slowly escalating its activities in the East China Sea. Last month, a Chinese navy ship took its time traversing the waters, attracting Japan’s attention. Japan also went public earlier this year with complaints about Chinese oil and gas exploration in the East China Sea, posting photos online of Chinese drilling rigs and other equipment.

The Japanese coast guard released a photo of the armed ship sailing in the East China Sea on Tuesday. It was one of four Chinese coast guard vessels spotted in the waters, but was the only one that was armed. They did not come close enough to the islands to violate what Japan considers its territorial waters.

Calls to China’s coast guard were not answered.