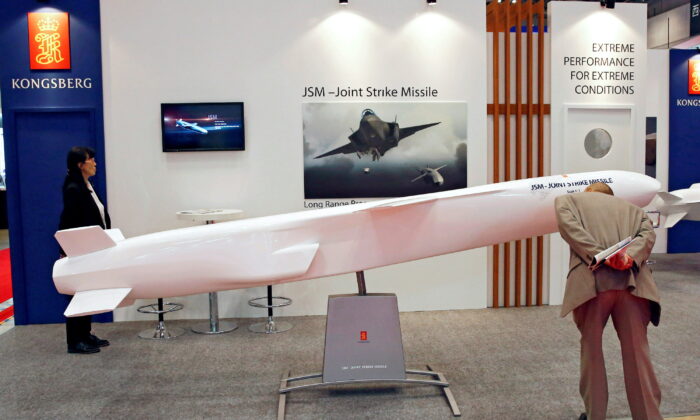 TOKYO—Japan will develop and mass produce a cruise missile and a high-velocity ballistic missile, it said on Wednesday, as it seeks the ability to strike more distant targets as part of a military expansion aimed at meeting threats from China and Russia.

The procurement plan unveiled in the Ministry of Defense’s annual budget request represents a clear departure from a decades-long range limit imposed on Japan’s constitutionally constrained Self Defense Forces, that meant they could only field missiles with ranges of a few hundred kilometres.

“China continues to threaten to use force to unilaterally change the status quo and is deepening its alliance with Russia,” the ministry said in its budget request.

“It is also applying pressure around Taiwan with supposed military exercises and has not renounced the use of military force as a way to unite Taiwan with the rest of China,” it said.

Alarm about the Chinese regime’s regional ambitions grew this month after it fired five ballistic missiles into waters less than 160 kilometers (100 miles) from Japan in a show of force after U.S. House of Representatives Speaker Nancy Pelosi’s visited Taiwan.

The ministry also mentioned North Korea as a threat to Japan.

The budget request is for funding to mass produce ground-launched cruise missiles, an extended range version of the Mitsubishi Heavy Industries designed Type 12 missile already in use, to strike ships, and a new, high-velocity glide ballistic missiles capable of hitting ground targets.

The ministry is also seeking money to develop other projectiles, including hypersonic warheads.

The ministry did not give a range for the proposed weapons, or say how many it planned to field, but they would likely be able to reach targets in mainland China if deployed along Japan’s nearby southwest Okinawa island chain.

Japan has already ordered air-launched missiles, including the Joint Strike Missile (JSM) made by Norway’s Kongsberg, and Lockheed Martin Corp.’s Joint Air-to-Surface Stand-Off Missile (JASSM) with a range of up to 1,000 km (620 miles).

Unlike with ship or ground-based launchers, however, the number it can fire is limited by how many planes it can put in the air to fire them.

The ministry asked for a 3.6 percent increase in spending to 5.6 trillion yen ($39.78 billion) for the year starting on April 1, but said the figure would rise after it calculated the cost of new procurement programs.

Prime Minister Fumio Kishida’s government will approve that increased request at the end of the year when it will also unveil a major defense strategy overhaul and new midterm military buildup plan.

Kishida, who has described security in East Asia as “fragile” after Russia’s invasion of Ukraine, has promised to “substantially” increase defense outlays to prepare Japan for regional conflict.

That would make Japan the world’s third biggest military spender behind major ally the United States, and neighboring China.

In addition to increasing stockpile of missiles and other munitions, Japan’s military wants to develop its cyber defenses, electromagnetic warfare capabilities, and space presence.