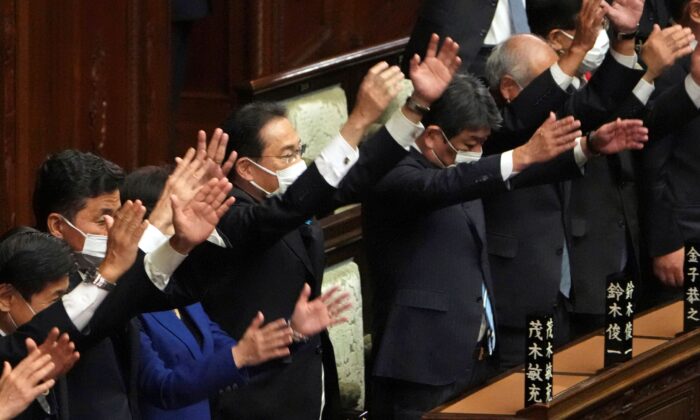 Japanese Prime Minister Fumio Kishida (C) and other lawmakers give three cheers after dissolving the lower house, the more powerful of the two parliamentary chambers, during an extraordinary Diet session at the lower house of parliament in Tokyo, on Oct. 14, 2021. (Eugene Hoshiko/AP Photo)
Asia & Pacific

Japan’s parliament passed a resolution on Tuesday expressing concern about alleged human rights abuses in Xinjiang Uyghur region ahead of the Beijing Winter Olympics on Friday, while remaining circumspect in its criticism of China.

The resolution was passed by the lower chamber, with approval from the ruling Liberal Democratic Party and some opposition parties.

It voiced concerns over the human rights situation and violations of freedom of religion in the Xinjiang Uyghur autonomous region, Tibet, and Hong Kong, calling on Japan’s government to work with the international community in resolving the issues and implement comprehensive relieving measures.

“Human rights issues cannot just be domestic issues because human rights hold universal values and are a rightful matter of concern for the international community,” the resolution said.

“This chamber recognizes changes to the status quo with force, which are symbolized by the serious human rights situation, as a threat to the international community.”

Japan, however, appears to avoid directly condemning the Chinese regime, as the resolution made no direct reference to “China.”

Japan has earlier said that it won’t send a government delegation to the Games in protest of the human rights situation in China, though Tokyo has refrained from calling the decision a diplomatic boycott of the Games.

Lawmakers from 20 countries on Monday urged the United Nations’ human rights office to release a long-awaited report on Beijing’s human rights violations in Xinjiang by Feb. 4, a date that coincides with the opening of the Beijing Winter Olympics.

The group pointed out that doing so would send a clear message that no government is above scrutiny or international law.

In addition, 243 nongovernmental organizations around the world, including the Uyghur Human Rights Project and World Uyghur Congress, have also issued a joint statement calling on more countries to boycott the Beijing Winter Olympics.

“The spectacle of the Olympics cannot cover up genocide,” executive director of the Uyghur Human Rights Project Omer Kanat said. “It’s hard to understand why anyone feels it’s even possible to celebrate international friendship and ‘Olympic values’ in Beijing this year.”

Several Western countries, led by the United States, have announced a diplomatic boycott of the Winter Games in protest of the Chinese regime’s “ongoing genocide and crimes against humanity in Xinjiang.”

Over 1 million Uyghurs and other Muslim ethnic minorities are being held in internment camps in Xinjiang, where they are reportedly subjected to abuses such as forced sterilization, forced abortion, rape, torture, forced labor, and child removal from their families.