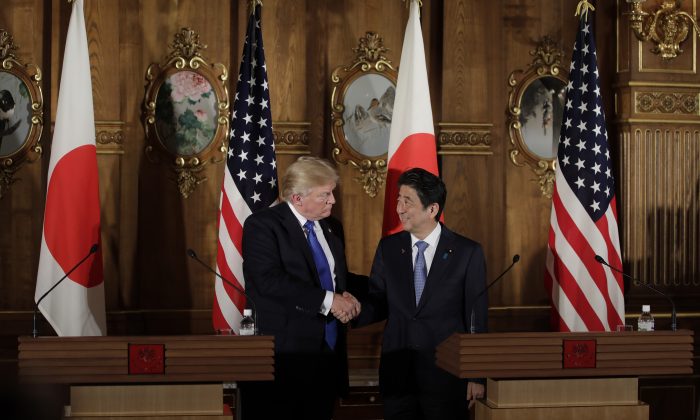 Japan announced on Tuesday that it is imposing new sanctions on North Korea.

The announcement came following a two-day visit by President Donald Trump to Japan where he and Prime Minister Shinzo Abe discussed the North Korean threat.

Under the new sanctions, assets of nine organizations and 26 individuals will be frozen.

“The North Korean missile and nuclear issue is a pressing threat unseen before,” said Chief Cabinet Secretary Yoshihide Suga at a news conference. “Its provocative actions, in which it has ignored the severe warnings of international society, are totally unacceptable.”

The organizations are North Korean banks, several of them based in China, while the individuals are based in a number of countries, including China, Russia, and Libya.

Suga said the move was taken in the wake of Trump’s visit as a way of demonstrating the determination of the two nations to stand together and increase pressure on Pyongyang.

In Japan, President Trump reiterated the United States’ commitment to work with Japan and South Korea against the North Korean threat.

Trump said that Japan will be buying a lot more U.S. military equipment. He said this will, on the one hand, help them keep safe with the most advanced equipment in the world, and on the other hand, help reduce the trade deficit the United States has with Japan and help to create jobs in America.

Trump and First Lady Melania Trump also met with an abductee victim and families of Japanese abducted by North Korea.

“For two days, President Trump and I spent many, many hours together, and had an in-depth discussion on various global challenges,” said Japanese Prime Minister Abe during a state dinner at the Akasaka Palace on Monday.

“I’m particularly grateful for President Trump and Madam First Lady, who kindly spent their time with a former abductee and the family members of those who had been abducted by North Korea,” he said.

Trump is currently in South Korea where he is discussing trade and the North Korean threat with South Korean President Moon Jae-in.

During a visit at Camp Humphreys in South Korea, Trump expressed hope that the situation with North Korea will be resolved.

“Ultimately it will all work out. Because it always works out—has to work out,” he said.

The Trump administration has said that the only solution to the North Korean situation is a denuclearization of the communist regime in Pyongyang.

“The close coordination between Korea and the United States, and the overwhelming superiority of power that stems from the ROK-U.S. alliance, will eventually make North Korea cease its reckless provocations and make North Korea come out to dialogue for denuclearization,” said South Korean Prime Minister Moon during a state a state dinner on Tuesday.

During the visit, Trump said that the South Korean military is becoming increasingly strong.

“We make the finest equipment in the world, and you’re buying a lot of it, and we appreciate that,” Trump said.

Trump said that North Korea poses a threat to the whole world, and requires worldwide attention.

“We call on every responsible nation, including China and Russia, to demand that the North Korean regime end its nuclear weapons and its missile programs, and live in peace,” Trump said.

He will visit China next on his 5-country Asia trip.

“I want to just say that President Xi—where we will be tomorrow, China—has been very helpful.  We’ll find out how helpful soon,” Trump said.