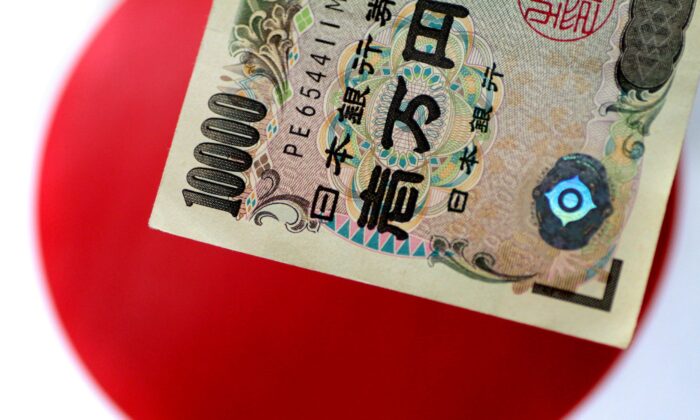 A Japan yen note is seen in this illustration photo taken on June 1, 2017. (Thomas White/Illustration/Reuters)
Economy

TOKYO—Tokyo is concerned about sharp falls in the yen currency and stands ready to “respond appropriately” if needed, Japan’s top government spokesperson said on Monday, issuing a fresh warning to markets.

The remark echoed Friday’s joint statement by the government and central bank, but failed to avert a plunge in the yen to 135.22 against the dollar, the currency’s lowest level since October 1998.

“It’s important that currency rates move in a stable way, reflecting fundamentals. But there have recently been sharp yen declines, which we are concerned about,” Chief Cabinet Secretary Hirokazu Matsuno told a regular news conference.

“We are ready to respond appropriately as needed, while communicating closely with each country’s currency authorities.”

Matsuno declined to comment on whether Tokyo would intervene to curb the sharp slump in the yen, however.

That increasing policy divergence has sent the yen down more than 15 percent against the dollar since early March.

Central bank chief Haruhiko Kuroda also warned of the disadvantages of yen declines, shifting away from his long-held stance that the currency’s weakness was generally good for the export-reliant economy.

“The yen’s recent sharp declines are negative for Japan’s economy and therefore undesirable, as they make it hard for companies to set business plans,” Kuroda, the bank’s governor, told parliament on Monday.

“The BOJ will communicate closely with the government, and scrutinise the impact currency moves have on the economy and prices.”

Kuroda repeated his pledge to keep monetary policy ultra-loose to support an economy yet to fully recover from the blow dealt by the coronavirus pandemic.

The yen briefly rallied late on Friday after the rare joint statement, seen as the strongest warning to date that Tokyo could intervene to support the currency.

But the currency lost momentum as the dollar strengthened after Friday’s U.S. inflation data reinforced market expectations for the Federal Reserve to aggressively raise interest rates in the fight on surging inflation.

By Leika Kihara and Kantaro Komiya