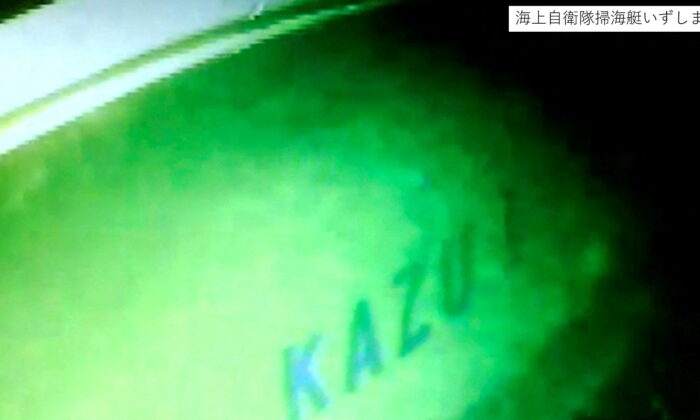 The hull of the "Kazu I", the tour boat disappeared in an accident that killed at least 14 people on a sightseeing trip, is pictured in waters about 100 meters deep off the Shiretoko peninsula on the northern island of Hokkaido, Japan, (Japan Coast Guard/ via Reuters)
Asia & Pacific

Japan Finds Wreck of Boat Missing After Accident That Killed 14

TOKYO—Japan located on Friday the hull of a tour boat off its northern coast, the coast guard said, six days after the vessel disappeared in an accident that killed at least 14 people on a sightseeing trip.

The hull of the “Kazu I” was found on the seabed at a depth of about 390 ft off the northern island of Hokkaido in pitch-dark waters shown in footage from an underwater camera of the Maritime Self Defense Force, the coast guard said.

The boat went missing on Saturday several hours after departing for a tour of the peninsula, famed for its rugged coastal scenery and wildlife.

The 26 aboard included two children and two crew. Fourteen were found dead, a coast guard official told Reuters, with the rest unaccounted for.

The coast guard said a Russian guard ship lost sight of someone wearing a life jacket who was adrift at sea in waters west of an island Japan refers to as Kunashiri on Wednesday afternoon.

Kunashiri, known in Russian as Kunashir, is one of four islands north of Hokkaido that are at the center of a territorial row between Tokyo and Moscow, after the Soviet Union seized them at the end of World War Two.