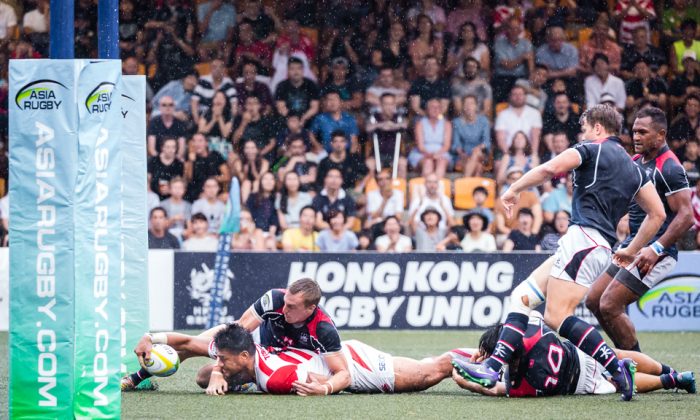 Japan winger Amanaki Lotoahea, stretches for the line for a try. Converted by Yamasawa, to take Japan to 13-0 in their Asia Rugby Championship match against Hong Kong in Hong Kong on May 13, 2017. (Dan Marchant)
HK Rugby Union

HONG KONG—Japan were crowned Asia Rugby Champions for 2017, beating Hong Kong 16-0 in close, gritty match at the Hong Kong Football Club, on Saturday May 13. It was a tight match, that Japan gradually took control of, although the two sides were more evenly matched than the scoreline suggests.

The difference between the two teams, was the ability to take chances, and Hong Kong’s heavy penalty count that cost them match momentum at critical times.

Hong Kong started brightly and looked the team more likely to score in the first 20 minutes, but missed both a kickable penalty and drop goal.  It was Japan, who put the first points on the board when fly half Takuya Yamasawa converted a 40 metre penalty goal after 30 minutes. Japan led 3-0, and took that lead into half time. The teams were evenly match: Hong Kong sharper in the lineout, Japan quicker recycling the ball. Both had defended well and shut out try-scoring chances.

The first ten minutes of the second-half decided the game. Japan won an early penalty, converted by Yamasawa to lead 6-0. Five minutes later, a clever grubber kick by Yamasawa, deft passing and  pick-up by Japan winger Amanaki Lotoahea, resulted in an arm stretch for the line adjudged by the TMO as a try. Duly converted by Yamasawa, and Japan eased ahead 13-0.

In 68th minute, Yamasawa slotted another penalty: at 16-0, with 10 minutes left to play, the match was slipping away from Hong Kong.

Last week Hong Kong’s bench came in for criticism: this week they provided a spark that nearly added two scores for Hong Kong in the final 10 minutes. Only last-ditch tackling by Japan kept Hong Kong off the scoreboard.

Japan deserved their win, but Hong Kong matched them in many areas. Had Hong Kong taken just one their scoring chances, the match momentum may have changed. Too many ‘what ifs’ for Hong Kong. There’s clearly impressive improvement and visible progress with the Elite Player Programme, but there won’t be satisfaction until matches like today are won not lost.

In the final round of matches Hong Kong play Korea. For both teams, these are ‘must win’ games. More so for Hong Kong, as Korea already have a try-scoring bonus point from their opening match against Japan. The games will be played on the May 27 in Korea, with the return match on the June 3 in Hong Kong.

A selection of match photos


Grahame Carder is a sports enthusiast, former player and resident in Hong Kong.