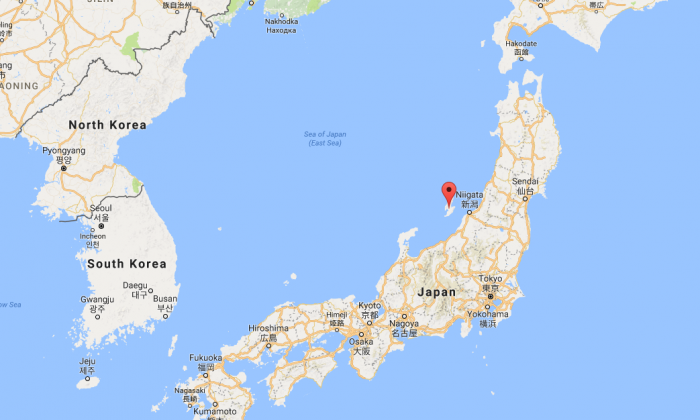 The map shows the sea of Japan, with Sado Island marked with a red pin. (Screenshot GoogleMaps)
Asia & Pacific

TOKYO—Japan’s Coast Guard found the body of a male and parts of a wooden boat suspected to be from North Korea on the coast of one of Japan’s outlying islands on Saturday, an official said.

The Coast Guard made the discovery around 6:30 a.m. local time on Saturday on Sado island, which is off the coast of Japan’s northwestern prefecture of Niigata, a coast guard official said, declining to give his name.

The guard also found a pack of cigarettes written in Korean and other personal belongings with Korean written on them near the body, the official said.

The cause of death is still unknown, the official said.

The discovery on Saturday marks the second time this month that parts of a wooden boat suspected to be from North Korea have washed up on the shores of Sado island, the official said.

On Friday, police found eight North Korean men near a boat at a seaside marina in northern Japan. The men appeared to be fishermen whose boat had trouble, rather than defectors, the police said.

Last week, the Coast Guard rescued three North Korean men on a capsized boat in the Sea of Japan who said they were fishermen and were later sent home aboard a North Korean vessel.

A North Korean soldier dramatically defected to South Korea last week after being shot and wounded by his country’s military as he dashed across the heavily guarded Demilitarized Zone between the two countries.