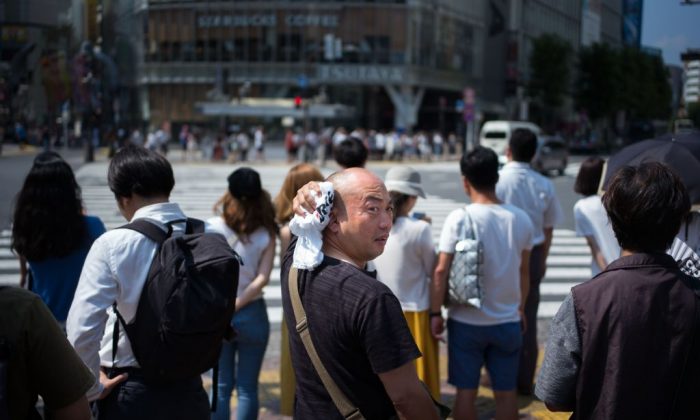 A man wipes perspiration from his head in Tokyo on July 24, 2018, as Japan suffers from a heatwave. (MARTIN BUREAU/AFP/Getty Images))
Asia & Pacific

Authorities in Japan have declared a heatwave there a natural disaster as at least 80 people have died due to the intense weather conditions.

The agency said 22,647 people were hospitalized in the previous week, while 80 people have died from the heat since the beginning of July. Among those who have died was a 6-year-old male student who lost consciousness on his way back from a field trip; and a 91-year-old woman who collapsed in a field.

Officials are working to combat the heat, with one effort supplying funds to all schools to ensure air conditioners are equipped by next summer. Right now, fewer than 50 percent of the country’s public schools have air conditioning.

Temperatures on Monday reached a high of 106 degrees Fahrenheit (41.1 degrees Celsius) in the city of Kumagaya, which set a new national heat record (the government began recording temperatures in 2008).

Meteorologists warned that temperatures will continue to rise above 95 degrees Fahrenheit (35 degrees Celsius) until early August.

“We are observing unprecedented levels of heat in some areas,” Japan Meteorological Agency spokesman Motoaki Takekawa said, adding that the heatwave was “a threat to life and we recognize it as a natural disaster,” BBC reported.

One Japanese resident, Nur Rosmawati, 27, who works in international business development, told the Straits Times that she blacked out while walking for five minutes from her house to a convenience store over the weekend.

“It was not sheltered but I had my umbrella with me. At the entrance of the convenience store, I started to feel faint and my ears started to ring,” she said, noting she quickly consumed an energy bar and a drink and felt better.

VIDEO: An 'unprecedented heatwave in Japan has killed at least 65 people in one week, government officials say, the weather agency now classifying the record-breaking weather as a 'natural disaster' pic.twitter.com/RCLEIjLGxP

“First I felt a migraine-like headache. I drank lots of water but by then it was too late,” she said. “The headache got worse, and I started feeling nauseous, followed by muscle aches.”

Japanese officials have been advising people to use air conditioning, stop to rest often when outside, and drink plenty of water and other fluids.

That set a new record for the Korean Peninsula, according to the Korea Meteorological Administration, which has been collecting weather data since 1907.