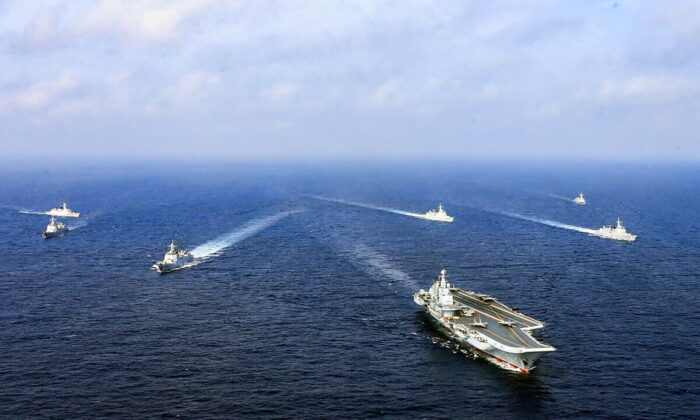 China's sole operational aircraft carrier, the Liaoning (front), sailing with other ships during a drill at sea in April 2018. (AFP via Getty Images)
Asia & Pacific

Japan’s Defense Ministry said in a May 3 statement (pdf) that eight Chinese naval vessels, including an aircraft carrier, passed between islands in Japan’s southern Okinawa chain on May 2.

The Liaoning and its five-ship strike group were first spotted approximately 350 kilometers (217 miles) southwest of Nagasaki prefecture’s Danjo islands on May 1, according to the statement. Another destroyer and a frigate joined the flotilla late on May 1 and early on May 2.

While there was no incursion into Japanese territorial waters, the ministry claimed that at least one warship landed within 160 kilometers (99 miles) of Taisho Island near the Japanese-controlled Senkaku Islands, which China also claims and calls the Diaoyu Islands, The Japan Times reported.

According to China’s state-run news agency Global Times, the Liaoning carrier group, consisting of eight warships, was “the largest to head out to far sea among recent voyages.”

Gao Xiucheng, a spokesperson of the PLA Navy, said on May 3 that the warships were on a routine combat training exercise in the West Pacific. Gao said the deployment was in line with international law and wasn’t targeted at any party.

Tensions between self-ruled Taiwan and the regime in Beijing have been escalating, as China claims Taiwan as part of its territory and has vowed to conquer the island by force if necessary.