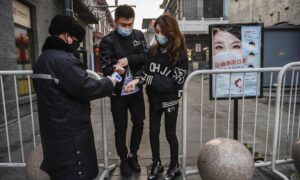 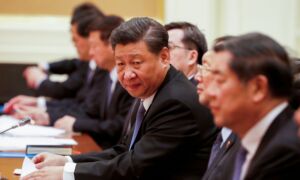 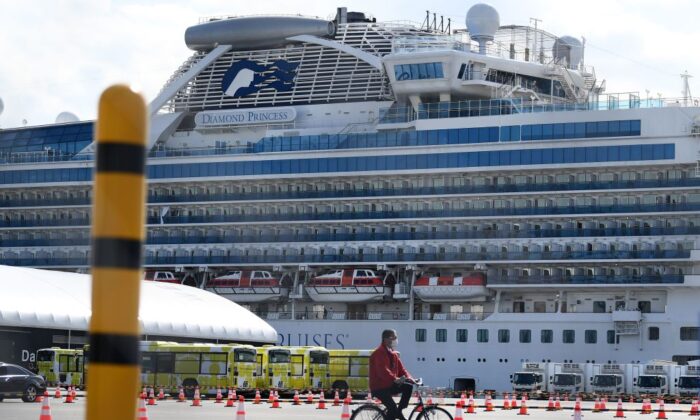 A man cycles past city buses (back L) lined up to transport the first batch of passengers disembarking from the Diamond Princess cruise ship at the Daikoku Pier Cruise Terminal in Yokohama on Feb. 19, 2020. (Charly Triballeau/AFP via Getty Images)
CCP Virus

The Novel Coronavirus crisis has deepened in both Japan and South Korea, after both countries reported a large number of new confirmed cases of the virus on Feb. 19.

Japan’s Ministry of Health, Labor, and Welfare said that 79 cases were confirmed after testing 607 people aboard the cruise ship Diamond Princess, which sees its 14-day quarantine at Yokohama end today.

The ministry added that there are now 621 known cases on the ship, after testing a total of 3,011 passengers and crew.

People who have tested negative for the virus began disembarking the cruise ship on Wednesday. Local outlet NHK reported that about 500 people are due to leave the ship today.

Meanwhile, South Korea’s Centers for Disease Control and Prevention (KCDC) reported 20 new cases of the virus on Wednesday, raising the country’s total from 31 to 51.

Of the new cases, the KCDC said that 15 are contacts of the 31st coronavirus case in the country—a 61-year-old South Korean woman who lives in Daegu, a city in North Gyeongsang province, 185 miles southeast of Seoul. The woman tested positive on Tuesday.

Fourteen of the 15 attend the same church as the woman, and the other one had contact with the woman at a hospital.

“A further epidemiological investigation at the church is underway to determine who was the source of the infection and what the pathway was,” KCDC Director Jung Eun-kyeong said in a briefing, according to The Korea Times.

Also among the new cases in South Korea is an 11-year-old girl, who is the daughter of the country’s 20th case, a 41-year-old Korean woman who tested positive on Feb. 5 while in self-quarantine.

Another case involves a 77-year-old man from Seoul who had not traveled outside South Korea recently.

Also on Wednesday a South Korean government plane returned from Japan with seven evacuees—six South Koreans and a Japanese spouse—who were aboard the Diamond Princess cruise ship, according to national broadcaster KBS.

The evacuees are set to undergo isolation in South Korea for 14 days at Incheon International Airport’s quarantine office.