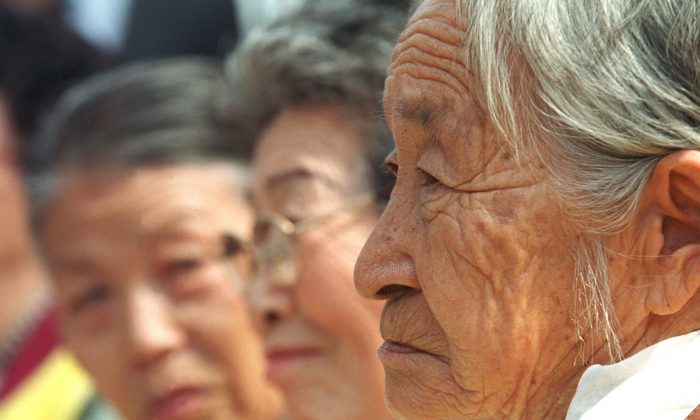 Japan and South Korea have very close alliances with the United States. They also have had diplomatic relations with each other for 50 years, not to mention considerable trade back and forth during that time. At a popular level, many Japanese are wild about Korean bulgogi and soap operas while many Koreans love Japanese sushi and anime. That doesn’t mean, however, that the two countries are particularly close. For decades, the legacy of Japanese colonialism and wartime conduct has remained a major stumbling block to improved relations.

South Korea and Japan spar over interpretations of that history, particularly as represented in textbooks. They also have a very concrete dispute over a particular island (Dokdo). But perhaps the most painful disagreement between the two countries has been over the “comfort women” issue.

An agreement last week on the “comfort women” issue—between Japanese Prime Minister Shinzo Abe and South Korean President Park Geun-hye—may finally put the matter to rest. But not everyone in the Korean community is happy with the deal.

As part of its expansionism in the early part of the 20th century, the Japanese Army dragooned as many as 200,000 young women and girls—from Korea, China, the Philippines, and elsewhere in the Asia-Pacific region—into sexual slavery. The practice began in 1931, when Japan occupied Manchuria, and the army wanted to prevent Japanese soldiers from raping Chinese women. At first, the army relied on prostitutes. By 1937, however, the army expanded the pool to those tricked into service or simply forced to participate against their will, including girls as young as 10. They were made to service as many 30-40 Japanese soldiers per day. Korea, a Japanese colony since 1910, provided the bulk of the involuntary participants.

For years after the war, Japanese officials focused on the first part of the story, insisting that the “comfort women” were prostitutes volunteering for the assignment. They also pointed to the 1965 agreement that established diplomatic relations between Japan and South Korea—and provided $800 million in various forms of compensation—as taking care of all colonial and wartime issues. Particularly as it became a democratic society in the late 1980s, South Korea began to reopen many wartime issues, including this issue of sexual slavery (and the even more sensitive question of Korean collaboration in the process).

Only in 1993 did Tokyo finally acknowledge the second, much darker part of the story that involved systematized rape. According to the Kono Statement, named after the Japanese government’s chief spokesman, Tokyo admitted that:

It also provided an apology:

Undeniably, this was an act, with the involvement of the military authorities of the day, that severely injured the honor and dignity of many women. The Government of Japan would like to take this opportunity once again to extend its sincere apologies and remorse to all those, irrespective of place of origin, who suffered immeasurable pain and incurable physical and psychological wounds as comfort women.

Although the “comfort women” had been calling for an apology and compensation, the Kono Statement did not meet their demands. The apology didn’t come from the prime minister nor was it approved by the Diet, and it shifted the responsibility for the brothel system entirely onto the shoulders of the Japanese military. Moreover, the compensation didn’t come from the Japanese government but rather from private sources. Although some “comfort women” took the compensation package, many did not. And the South Korean government considered the apology insufficient as well.

At the same time, however, many Japanese conservatives were outraged at even this mild statement from their government. Denial of the existence of the system of sexual slavery was part of a larger conservative narrative in which imperial Japan acted strictly by the book during the Great Pacific War—no Nanking Massacre, no prisoner camp atrocities, no medical experimentation a la Joseph Mengele.

When the champion of the hard right in Japan, Shinzo Abe, became prime minister, he initially parroted their views on “comfort women.” In 2007, he told the press, “There was no evidence to prove there was coercion as initially suggested.” His comments initiated a fresh wave of outrage in Korea.

Shinzo Abe is now on his second tour as Japanese prime minister. He has continued to court the far right by, among other things, visiting Yasukuni Shrine in 2013. But Abe has a larger agenda. He wants to usher in a new era for the Japanese military as a “normal” force that engages in offensive actions, effectively overturning the country’s “peace constitution.” And he is eager to secure a permanent seat for Japan on the U.N. Security Council.

To achieve these goals, however, Abe must silence the critics who believe that Japan is not sufficiently contrite about its military past. Since South Korea is a major international player—and a key U.S. ally—Abe must somehow repair relations with Seoul. This year was the 50th anniversary of the 1965 agreement, as well as the 70th anniversary of the end of World War II, so Abe’s gambit was well timed.

The latest agreement is a step forward from the Kono Statement. This time, it was the prime minister himself who made the apology. And the money for the compensation fund, to be administered by the South Korean government, will come not from private Japanese businesses but from the Japanese government itself.

But many South Koreans remain skeptical. They don’t trust Abe, in part because of his earlier statements on the matter. And they have their doubts about Park Geun-hye as well. The South Korean prime minister has been constrained in her remarks about Japanese conduct during World War II in part because her father, the South Korean authoritarian leader Park Chung-hee, had been a collaborator with the Japanese army.

And for those who have been struggling against the historical amnesia of Japanese government officials, the wording of the recent agreement is still too vague. One of the key organizations representing the “comfort women”—the Korean Council for the Women Drafted for Military Sexual Slavery by Japan—issued a statement condemning the agreement:

Although the Japanese government announced that it “feels [its] responsibilities,” the statement lacks the acknowledgment of the fact that the colonial government and its military had committed a systematic crime. The government had not just been simply involved but actively initiated the activities which were criminal and illegal. Also, the apology was not directly made by the Prime Minister himself as the official representative of the government but was read by a diplomatic representative, while it was unclear to whom he was actually apologizing. Hence it is hard to believe if it was a sincere apology.

In addition, the announcement specified that Korean government will be responsible for establishing the foundation, despite the fact that Japanese government must be actively involved in follow-up initiatives, including acknowledgement of its criminal responsibilities and legal reparations. It appears that Japan will pass the future responsibilities on to the government of the victims’ country after simply paying off the money.

Another point of contention is the statue in front of the Japanese embassy in Seoul. Erected in 2011, the statue depicts a young girl sitting on a chair and looking with great emotion at the embassy. Tokyo has long complained about the statue. As part of the agreement, the South Korean government promised to “address this issue” (the Japanese government would probably have appreciated less vagueness on this aspect of the deal).

It’s not just one silent statue, however. Since 1992, protestors have gathered every Wednesday in front of the Japanese embassy in Seoul to stage a protest on the “comfort woman” issue. Last week, hundreds of people angry about the agreement joined the protest. Meanwhile, the Chinese government has deemed the deal insufficient, the Taiwanese are pushing for a comparable agreement, and the main Filipino organization of “comfort women” wants the government in Manila to take advantage of the new situation to press their case more effectively.

The governments in Tokyo and Seoul, under pressure from Washington, are willing to move on. With the number of survivors dwindling every year, perhaps they reason that soon the issue will soon effectively disappear. But memories are long in South Korea, and Abe’s larger agenda of increasing Japan’s military and diplomatic influence is far from winning over all its skeptics.

John Feffer is the director of Foreign Policy in Focus (FPIF). This article was previously published on Lobelog. Republished from FPIF under Creative Commons License 3.0.