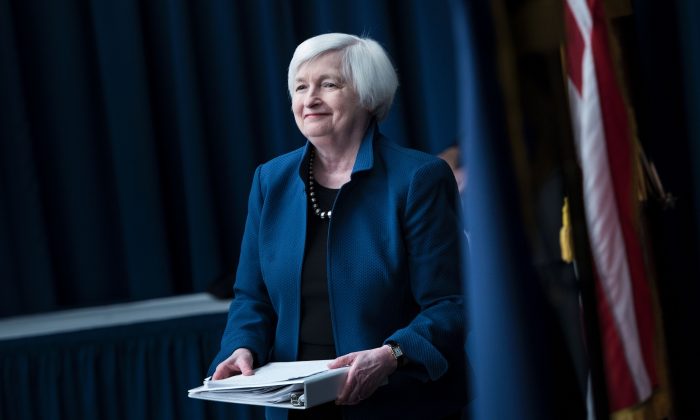 Janet Yellen will be replaced by Jerome Powell as head of the Federal Reserve (Fed) when her first and only term ends in February 2018.

Nonetheless, many believe she has done a good job as Fed chair. She inherited a very loose monetary stance from her predecessor, Ben Bernanke, and started to apply the brakes to a very dangerous machine as soon as the U.S. economy began to recover. Right now, financial markets and the economy are in the best shape since the financial crisis. But this does not mean Yellen’s job is over, nor that there aren’t any risks to the recovery.

In the next few weeks, Yellen will be facing her final challenge at the Fed. Her task is to neutralize the profligacy of the past before inflation breaks out and the stock exchange corrects. She must also minimize the impact of higher interest rates on the beneficiaries of the easy-money bonanza.

At this time, however, Americans are happy. Consumers have been financing and refinancing their purchases at real interest rates close to zero. The same goes for the real-estate market, while the U.S. Treasury and large corporations have borrowed lavishly at low cost. Retired people and investors have also had reason to celebrate during the Yellen years. While bonds have paid disappointingly low interest, stock prices have surged, making up for low yields in the form of capital gains.

The Fed’s masterstroke (or good luck) was that all this injected liquidity ended up on the stock exchange.

Riskier emerging markets have benefited from years of easy money in the United States and Europe. Several shaky borrowers have managed to find investors looking for a quick return on high-yield bonds. It has been a time when lenders forgot about risk and enjoyed a good return, while borrowers filled up their tanks and avoided consolidation and restructuring.

The Fed’s masterstroke (or good luck) was that all this injected liquidity ended up on the stock exchange, rather than being used for consumption. Higher stock prices made investors (including retired people) happy, while a surge in consumer price inflation, which could have shaken the financial system, was avoided.

Can Yellen keep the Goldilocks scenario going until she departs in February?

There is one key instrument that Yellen has used to keep the good times going.

Until recently, financial markets expected a drastic rather than a soft change in the Fed’s monetary policy. This “hard landing” would have involved a relatively sharp rise in interest rates, troubles in some developing countries, and a hard-to-predict response by the real economy. Private consumption, real estate prices, and investments in fixed capital (machinery) could have all behaved like a roller coaster.

Nothing of the sort happened, because Yellen and the Fed opted for a super-soft approach. Ten-year Treasury yields today are roughly where they were three months ago. Rather than executing a U-turn and absorbing liquidity, the U.S. central bank decided to reduce the amount of additional liquidity it would inject, and announced that it would start drenching liquidity in 2018, if not later. Markets were relieved.

Investors have kept buying stocks despite overblown prices, household spending has held up nicely, and bad borrowers have continued to find plenty of creditors in search of high returns. Even a few months ago, this kind of a soft landing sounded rather unlikely. Now, the picture is more promising.

Yet this encouraging scenario is heavily dependent on expectations and growth. These are at risk because the Fed has resolved to stop handing out gifts of easy credit and cheap mortgages to a large share of the U.S. population. It has also decided to forget about the capital gains Americans received during almost a decade of easy money.

The Fed Has Your Back

Under the global Goldilocks scenario, and with China and Europe doing relatively well, the Fed seems to believe that the imbalances inherited from the past can be neutralized gradually. Excess liquidity can be mopped up by the greater demand for money generated by larger incomes, and overblown levels of public indebtedness will appear less threatening as the debt-to-GDP ratios recede and governments become less vulnerable to sudden increases in debt-service costs.

One could argue that the Fed’s prudent policy aims to ensure that no uncertainty creeps in, and that the possibility of future roller coasters remains off the radar. Yellen and her colleagues are following expectations, but at a distance; when markets believe that liquidity should be restrained (with moderation), the Fed gets the message.

Market operators, trusting their message will not be ignored, factor in the monetary policy moves that are expected to follow. So far, the Fed has not disappointed them. The world of money and finance expected slowly rising interest rates until at least mid-2018, and that is what they got. Should a negative shock occur, the Fed would be expected to pause or reverse course, and the consequences of the shock would be partially offset by easier money.

In this light, U.S. monetary policy during Yellen’s last act and beyond hinges on whether the present momentum can be sustained. If global growth stays above 3 percent and growth in the developed Western economies is above 2 percent, a soft-landing scenario is indeed realistic. Expectations will include a moderate rise in interest rates and the monetary authorities will oblige. But this kind of economic performance cannot be taken for granted.

Unless productivity picks up, economic growth in the Western world is going to sputter. Perhaps the reason why today’s most prominent central bankers—Yellen at the Fed and Mario Draghi at the European Central Bank—are still smiling is because they want to keep investors quiet.

For the same reason, Yellen and Draghi might hesitate about taking vigorous action to neutralize monetary liquidity, because they know that today’s optimism has fragile foundations. It is better to stay cautious and steer a steady course, rather than assume an aggressive stance and then be forced to change tack when the winds shift and the seas get rough again. So from the monetary viewpoint, there is no reason to expect more tightening in the near future.

One may doubt whether easy money can be justified because of slow growth. Unless productivity accelerates relatively soon, however, today’s economic performance in the United States and parts of Western Europe will soon be only a fond memory. But Yellen will not be blamed for having nipped the recovery in the bud.

Enrico Colombatto is a professor of economics at the University of Turin, Italy, and a senior fellow at Geopolitical Intelligence Services.  This report was originally published by GIS Reports Online.

Enrico Colombatto
Follow
Enrico Colombatto is a professor of economics at the University of Turin, Italy, and a senior fellow at Geopolitical Intelligence Services. This article was first published by GIS Reports Online.