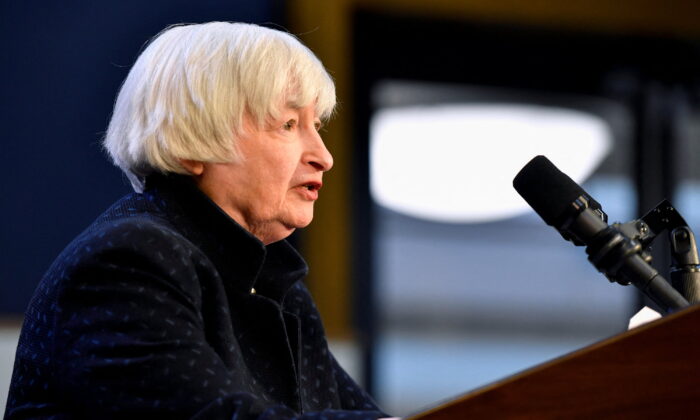 Secretary of the Treasury Janet Yellen speaks after touring the Denver Mint in Denver on March 11, 2022. (Jason Connolly/Pool via Reuters)
Economic Policies

U.S. Secretary of Treasury Janet Yellen spoke on Thursday about the growing market for cryptocurrency assets, speaking optimistically about the financial innovations of the blockchain while also cautioning that such developments must be regulated to protect consumers and the economy.

During Thursday’s remarks, Yellen emphasized “responsible innovation” as the key feature of the Department of Treasury’s policy toward cryptocurrency, advocating for a cautious but open approach to the regulation of crypto assets.

“Innovation that improves our lives while appropriately managing risks should be embraced. But we must also be mindful that financial innovation of the past too often has not benefitted working families, and sometimes it’s exacerbated inequality, giving rise to illicit finance risks and increased systemic financial risk,” said Secretary Yellen.

“As banks and other traditional financial firms become more involved in digital asset markets, regulatory frameworks will need to appropriately reflect the risks of these new activities,” the Treasury secretary continued.

These remarks mark the first time that Janet Yellen, who also previously served as head of the Federal Reserve, has addressed the cryptocurrency market since President Joe Biden signed an executive order on the subject last month, effecting the most comprehensive policy for blockchain assets by U.S. regulators to date.

Cryptocurrency markets have experienced trepidation throughout Biden’s term, fearing that an aggressive regulatory policy could curtail the usefulness and value of crypto assets. However, the new executive order has somewhat assuaged these fears, as investors are reassured by the order’s cautious optimism about the young financial technology.

Biden’s order seeks to address numerous problems that have arisen with crypto assets, with a particular focus on protecting consumers, promoting national financial stability, and mitigating illicit uses of cryptocurrency. Despite proposing certain restrictions on these assets, the executive order was generally well-received by the cryptocurrency industry: MicroStrategy CEO Michael Saylor has stated that the executive order amounts to the “president of the United States giving a green light to bitcoin.”

“If I scan the last 100 years of history [and ask] when was the last time the president of the United States directed the government to embrace a new asset class, the answer is never,” said Saylor at a conference on Thursday.

Prior to Biden’s signing of the crypto executive order, there were reports from anonymous White House insiders that the matter had been a source of controversy between Yellen’s staff and the National Economic Council, as the Treasury secretary reportedly believed that an executive order would be unnecessary and premature (these reports were denied by Treasury spokesman John Rizzo).

In any event, Yellen’s remarks Thursday seemingly indicate that the Treasury secretary is in consensus on the policy put forward by the Biden administration.

“In my view, the government’s role should be to ensure responsible innovation—innovation that works for all Americans, that protects our national security interest and our climate, and contributes to our economic competitiveness and growth … I think this sort of pragmatism has served us well in the past, and I think that’s the right approach today,” said Secretary Yellen in conclusion to her remarks.