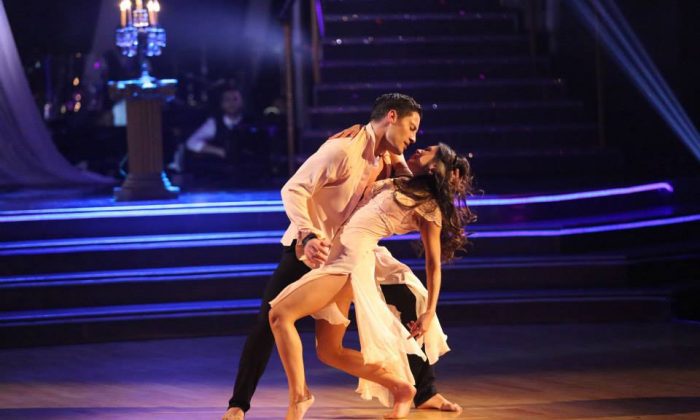 Janel Parrish and Val Chmerkovskiy appear to be an official couple, holding hands in New York City after appearing on The View on Wednesday.

The hand-holding came just hours after the duo kissed twice while dancing on Good Morning America.

The duo also kissed during their final dance on Dancing With the Stars, a Freestyle “love poem,” on Monday night.

On the results show on Tuesday, Janel declared that Val was her “trophy” from the season and emphasized how much she loves him. Val mouthed “I love you” to her after her video tribute to him aired during the live show.

Now pictures have emerged of Janel, 26, and Val, 28, holding hands while walking around New York. One picture shows Janel smiling while Val looks slightly stunned to be caught on camera.

Janel and Val appeared on the shows along with the other finalists–Sadie Robertson and Mark Ballas, Bethany Mota and Derek Hough, and Alfonso Ribeiro and Witney Carson.

Alfonso and Witney won the coveted Mirror Ball on Tuesday night after getting the highest scores, which are combined from the judges and the public.

If Val and Janel had won, it would have made it back-to-back wins for the Chmerkovskiy family. Maksim Chmerkovskiy and Meryl Davis won season 18.

“Meryl and Maks,” as they came to be known, were also surrounded by dating rumors, but Janel and Val took it to another level this season with their not-too-subtle romance. They kissed multiple times during the season, including backstage in week 1. Janel told Val, “I love you” on that week.

Janel and boyfriend Payson Lewis split up several weeks into the show, although there was no specific indication of the reason behind the break up.

to @janelparrish..You are so many things, but the one thing that truly matters is your heart. They can never say you didn’t have heart. you fought every step of the way. I’m so impressed with you and grateful to have been your partner. I said from the beginning I had the best one, seemed cocky at the time but I meant it enough to say it. I believed in it enough to risk it. We didn’t always say the right things, do the right things, but we always meant the right things.. and for that I’m proud and thankful. Love you J congrats my champ

Janel and Val both danced around the question of a romance between them.

“As far as the rumors of romance between Val and me, I just want people to focus on the dancing that we do and the hard work that we do,” Janel wrote in a blog post for People magazine last month.

“I appreciate that people see that we have chemistry.”

Val tried to answer the question in a video recap of the rehearsals one week.

“What is my relationship with Janel? Is there an attraction between us two? I don’t know. I think nature just made things work that way.,” he said.

“The’s my partner, she’s my friend, I want to see her do well. Whatever feelings I have for Janel – it just can’t be phrased in a bite. I’m sorry America. Stay tuned.”

The show often has teams surrounded by dating rumors, although few end up in official romances. Only three have been documented so far for the U.S. version of the show, and none of them have lasted until today.

Both Val and Janel gave an update this week, with Val saying in an interview broadcast during the finale, “I’m going to missdancing with Janel–but I’m finaly going to get a chance to get to know her outside these crazy circumstances.”

“Farewell, DWTS. Best time of my life!!” Janel added on Instagram “…I take with me a strength I never knew I had and all the loving memories in the world. All my love and thanks to you @iamvalc. I’m gonna be real jealous of your next partner.”