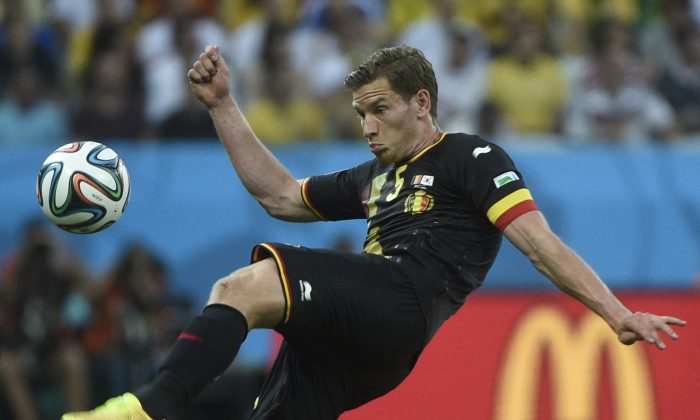 Belgium's defender Jan Vertonghen kicks the ball during a Group H football match between South Korea and Belgium at the Corinthians Arena in Sao Paulo during the 2014 FIFA World Cup on June 26, 2014. (MARTIN BUREAU/AFP/Getty Images)
Soccer

Jan Vertonghen got Belgium on the board against South Korea on Thursday–despite the team being down a player.

Steven Defour received a red card late in the first half, leaving Belgium with 10 men for the duration of the game.

Nonetheless, the team kept attacking, and Vertonghen swept in toward the goal in the 79th minute and knocked a rebound into the goal.

Belgium has secured a spot in the Round of 16 but it’s possible that Algeria will bump them down to second place, in which case they would face Germany.

Algeria and Russia are currently tied 1-1.

SAO PAULO—Belgium is making several changes to its lineup, with four players getting their first taste of the World Cup in a game against South Korea, which made two changes.

Belgium is already through to the second round but will seek at least a draw against South Korea to be sure to win Group H and avoid Germany in the second round and instead play the United States.

South Korea only has an outside chance to advance and replaced goalie Jung Sung-ryong with Kim Seung-gyu. It also benched striker Park Chu-young for Kim Shin-wook.

Belgium kept injured captain Vincent Kompany and Thomas Vermaelen out of the team and sidelined yellow-carded Toby Alderweireld and Axel Witsel to make sure they are not suspended for the second round. Playmaker Eden Hazard was also benched.