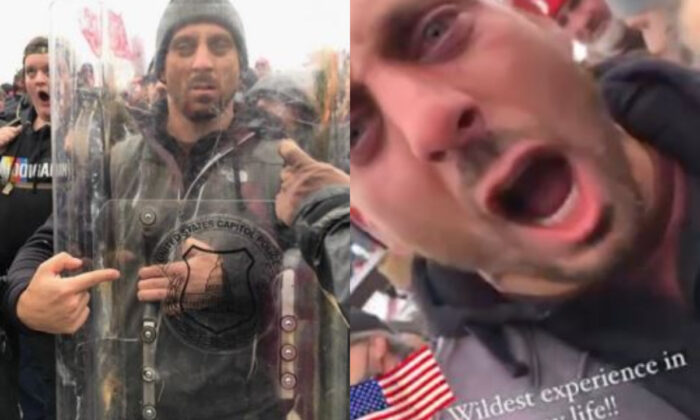 In this combination of images, Thomas Sibick is seen in Washington on Jan. 6, 2021. (FBI)
US News

An accused U.S. Capitol rioter was ordered released from jail on Oct. 26 after a federal judge expressed concerns about him remaining among fellow Jan. 6 defendants.

Thomas Sibick was released to the custody of his parents and told to submit to continued mental health treatment, according to court documents.

U.S. District Judge Amy Berman Jackson, an Obama nominee, said the defendant cannot use any social media, watch “any political news programs,” or attend any political rallies. She also said he cannot have access to “any internet-capable devices.”

Apart from mental health appointments, Sibick was told not to leave his parents’ home in Buffalo, New York unless he was attending religious services with them. He may go onto the porch/patio of the residence as he desires.

Sibick was charged (pdf) with multiple counts, including assaulting, resisting, or impeding officers, after authorities said he was seen in video footage and photographs participating in the Capitol breach.

He was arrested on March 12 and ordered detained pending trial five days later.

Sibick has pleaded not guilty to the charges.

Berman ordered his release after he wrote her a letter to her disavowing former President Donald Trump and his lawyer described a dramatic change in his beliefs since the breach occurred.

Brennwald argued that the dozens of Jan. 6 defendants in the Washington jail are “radicalizing,” using the example of them singing the Star Spangled Banner every night at 9 p.m.

Berman Jackson said that Sibick appeared to have experienced a mental health breakthrough at the jail and believed there was a “toxic environment” there that included pressure being placed on Sibick to be a certain way.

Other letters had been sent to the judge from people who knew Sibick, including D.C. Department of Corrections staff, who attested that, among other things, he had performed duties well in jail.

Prosecutors argued none of the information he submitted was new and should not have a material bearing on whether he should be freed. They alleged that the Bail Reform Act, when applied to the case, meant he should remain detained pending trial.

“The defendant’s actions on January 6 are not an isolated incident of lawlessness—the defendant has six prior convictions, namely, convictions for disorderly conduct, 1 attempted reckless endangerment, and failure to stop or respond to a command of police, as well as two convictions for possession of illegal substances, and a conviction for driving while intoxicated,” they said in a motion.

The D.C. Department of Corrections told news outlets Tuesday that its mission is to provide an orderly, safe, secure, and humane environment for pretrial detainees and sentenced inmates.

The agency said it makes decisions on how to house inmates and detainees based on safety, security, and order, which includes separating those who pose certain risks from the general population.

Some Jan. 6 defendants have complained about the conditions at the lockup and jail officials were admonished by a different judge earlier this month.