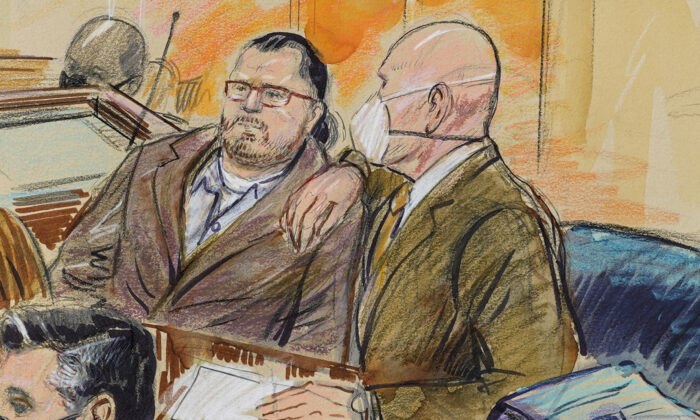 The jury in Washington returned the unanimous verdict after just two hours of deliberation.

Reffitt faces up to 20 years in prison, although defendants rarely get the maximum sentence.

Reffitt is not believed to have entered the Capitol itself, but was captured outside the building wearing a helmet and a camera when it was breached.

One video clip played for jurors showed Reffitt repeatedly urging rioters to drag House of Representatives Speaker Nancy Pelosi (D-Calif.) and other lawmakers out of the Capitol building.

“I didn’t come here to play—I’m taking the Capitol,” the video showed Reffitt saying at one point. “I just want to see Pelosi’s head hitting every stair on the way out.”

Risa Berkower, one of the prosecutors, claimed during closing arguments that Refitt was “a leader” on Jan. 6, adding, “When the defendant stepped to the front of the crowd, he forced the Capitol Police into an impossible last stand to protect the people inside.” William Welch, Reffitt’s lawyer, said his client was only guilty of entering a restricted area. “This case has been a rush to judgment, most of it based on bragging and a lot of hype,” Welch told jurors. “Be the grown-ups in the courtroom. Separate the fact from the hype.”

“He said, ‘If you turn me in, you’re a traitor,'” Jackson Reffitt, 19, told jurors during his testimony. “‘And traitors get shot.'”

Reffitt, who has been held in federal detention since his arrest on Jan. 16, 2021, did not take the stand.

Jurors were told before deliberating that every defendant is presumed to be innocent and that prosecution must prove a defendant is guilty beyond a reasonable doubt.

Some 200 defendants have already pleaded guilty to charges relating the breach, while over 775 people have been arrested for allegedly being involved. The latest, Proud Boys leader Enrique Tarrio, was set to appear in federal court in Florida on Tuesday.

The U.S. Attorney for the District of Columbia, Matthew Graves, told news outlets in a statement that the jury “held Guy Reffitt accountable for his actions” and thanked jurors “for upholding the rule of law.”

Reffitt’s wife, Nicole, told reporters outside the courtroom her husband was convicted on his First Amendment rights and that the verdict was “against all American people.”

The jury was attempting to “intimidate other members of the 1/6ers,” she alleged, urging other Jan. 6 defendants not to take plea deals.

Joe Hanneman and Reuters contributed to this report.