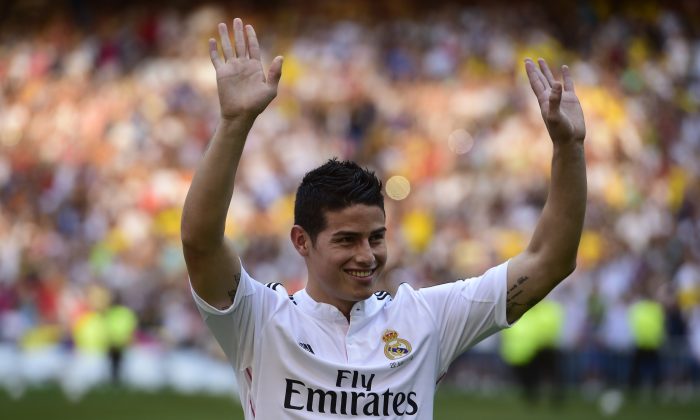 Colombian striker formerly at AS Monaco James Rodriguez poses during his presentation at the Santiago Bernabeu stadium following his signing with Spanish club Real Madrid in Madrid on July 22, 2014. Spanish media said Real paid about 80 million ($108m) for Rodriguez, making him one of the most expensive players ever. Neither club gave a figure, but Monaco said it was 'one of the biggest transfers in football history.' (PIERRE-PHILIPPE MARCOU/AFP/Getty Images)
Sports

Colombia and Real Madrid star James Rodriguez seems very much like a family man, judging by his social media account.

The couple has a daughter, Salome Rodriguez, who was born in 2013.

Check out some photos of the Rodriguez family from James’ Instagram.

See an AP story on Rodriguez’s move to Real Madrid.

MADRID (AP) — After scoring the most goals of any player at the World Cup, Colombia forward James Rodriguez signed a six-year deal with Real Madrid on Tuesday.

The 23-year-old Rodriguez, who helped Colombia reach the quarterfinals in Brazil, passed a medical examination at the Sanitas Clinic in the northern suburb of La Moraleja and will be introduced to fans at the Santiago Bernabeu Stadium on Tuesday afternoon.

“I’m very happy,” Rodriguez said as he left the clinic. “Everything went well.”

Sports newspapers Marca and As said Madrid agreed to pay Monaco $108 million for Rodriguez. He is expected to join the squad Aug. 1.

Rodriguez’s goal against Uruguay in the round of 16 at the World Cup, when he chested the ball down and then volleyed it in, was voted the best of the tournament. He scored a total of six times.

The Colombia forward will likely wear the No. 10 jersey, vacated when Mesut Ozil left Madrid for Arsenal.