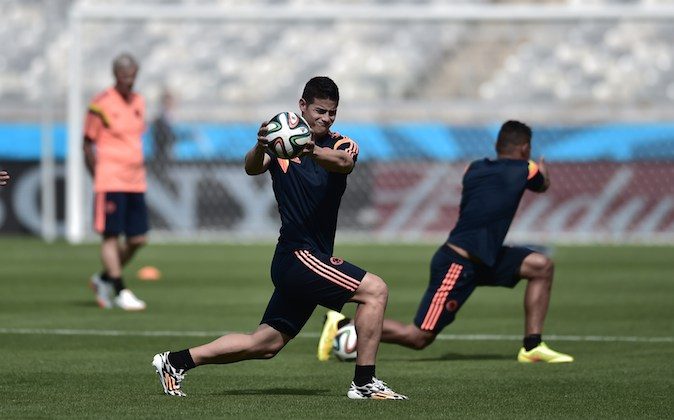 Monaco winger James Rodriguez could play in the English Premier League next season.

The 22-year-old Colombian, who is in Colombia’s World Cup squad, is reportedly frustrated by the lack of challenge in the French Ligue 1, and wants to move on to either England or Italy, Express reports.

Rodriguez cost Monaco £35 million ($59.3 million) to bring in from Porto. He played 38 games for the French side and scored 10 goals.

Manchester United and Tottenham Hotspur tried to woo Rodriguez last summer, and could yet get their chance in this transfer window.

Here is an AP article on Colombia’s upcoming World Cup 2014 match against Greece.

Colombia Searching for Equilibrium Against Greece

Colombia, taking part in its first World Cup since 1998, boasts a strong attacking lineup despite Radamel Falcao’s exclusion. While Pekerman doesn’t want to sacrifice Colombia’s aesthetic style, he wants his team to play with equilibrium.

He also hopes his players won’t get frustrated at Greece’s tactics.

“Traditionally, South American teams have a hard time against these types of opponents (which) play with a lot of determination and a mentality that say ‘we play this way and we can get a result,'” Pekerman said.

Teams like Greece, “They’re not bothered when others say to them, ‘Why don’t you play another way?'” he added. “Their style is well-defined and they are proud of it. Because of this, they are very strong.”

However, the notion that his Greek team would focus primarily on defense seemed to offend coach Fernando Santos.

“The most important thing is the whole team,” he said. “If we only play defense, we will lose. In football, you don’t play with four people (defenders). You need strikers, midfielders.

“My team is going to play to win. I think Colombia will do the same. That’s what I expect: both teams trying to win.”

Colombia and Greece both trained at Mineirao Stadium on Friday in Belo Horizonte, which will host the Group C opener. Before Colombia’s session, the players formed a circle on the pitch and prayed.

Pekerman said his team had become “a family” after Colombia was dealt a number of setbacks before travelling to Brazil.

Falcao, the team’s star forward who scored nine goals in qualifying, was cut from the squad last week after failing to recover in time from a serious knee injury. Center back Luis Perea was also dropped because of a thigh injury. Then, midfielder Aldo Ramirez was sent home with a foot injury days after Pekerman announced his final squad.

“Like all families, we deal with problems and work on finding a solution,” said Pekerman, adding that Falcao and Perea would be in Brazil to support the team. “The injuries are in the past.”

Colombia will also be without suspended midfielder Fredy Guarin for the first match.

Falcao’s injury came shortly after Colombia qualified and the team hasn’t had many international friendlies since then to experiment with how the other strikers, including Carlos Bacca, Teofilo “Teo” Gutierrez and Jackson Martinez, link up with main playmaker James Rodriguez.

“We hope (the strikers) adapt as quickly as possible,” Pekerman said. “There isn’t time for more tests. Whoever is selected must do important things.”

Greece considers Colombia as the toughest team in the group, which also includes Japan and Ivory Coast. Greece will be relying on veterans like Costas Katsouranis and captain Giorgos Karagounis, who were part of the team that won the 2004 European Championship.

The 37-year-old Karagounis, playing in his last tournament, also didn’t appreciate Greece being defined as a defensive team.