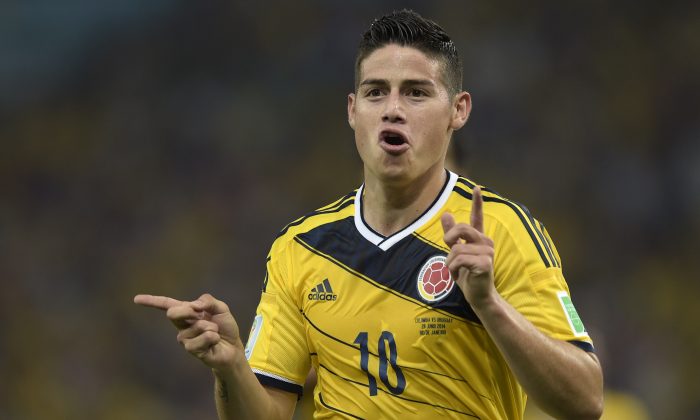 Journalist Juan Gato sighted the 23-year-old Colombian star at the airport, and tweeted out some photos.

Another Twitter user, @jmagomez8, also saw Rodriguez, and tweeted, “I have just seen James on the Madrid to Medellin plane, we are on the same flight.”

[View the story “James Rodriguez in Madrid” on Storify]

Earlier in the week, Spanish newspaper AS reported that Rodriguez had already agreed personal terms with Real Madrid.

The talented youngster will sign a five-year-deal with Los Blancos, and will earn a salary of 7.5 million euros ($10.1 million) a season.

AS Monaco, whom Rodriguez currently plays for, is willing to let their star playmaker go for 70 million euros ($94.7 million) plus a Real Madrid player.

Brazilian midfielder Casemiro could be involved in the swop deal, although Monaco originally wanted Pepe or Fabio Coentrao.

Real Madrid was not willing to part with either defender.

Rodriguez has not attempted to hide his ambition to be a Galaticos some day.

“Playing for Real Madrid is my life’s dream: it’d be a privilege to play alongside so many stars,” he said in an interview.

If Rodriguez is indeed in Madrid to seal the deal, then he will be living the dream very soon.