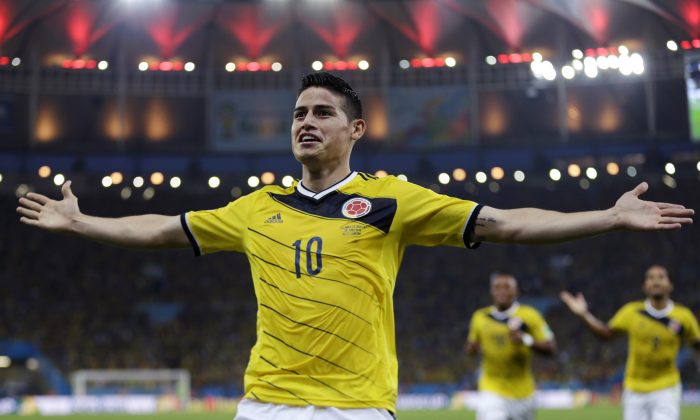 FILE - In this June 28, 2014, file photo, Colombia's James Rodriguez celebrates after scoring the opening goal during the World Cup round of 16 soccer match between Colombia and Uruguay at the Maracana Stadium in Rio de Janeiro, Brazil. Never before has the star-crossed nation made the quarterfinals. There is even waxing poetic about World Cup unity accelerating the pace of 18-month-old peace talks to end a half-century of conflict that has claimed some 220,000 lives. (AP Photo/Natacha Pisarenko)
Sports

Colombian soccer star James Rodriguez has admitted that he dreams of playing for Real Madrid.

The 23-year-old Monaco player has recently been linked with a €80 million ($109 million) move to Real Madrid.

When asked by Spanish newspaper Marca about his thoughts about Real Madrid, Rodriguez said: “Playing for Real Madrid is my life’s dream: it’d be a privilege to play alongside so many stars. If it happened, I’d enjoy it to the max.

“It’s really flattering to know that a club of Real Madrid’s stature is interested in me. It’d be a dream to join the club of my dreams.”

Rodriguez has been supporting Madrid since, “the days when Zidane, the Brazilian Ronaldo, Roberto Carlos and Fernando Hierro were around.”

“I have a great deal of respect for other clubs and admire the good football they play, but ultimately Real Madrid are Real Madrid,” he said.

“I’ve always had a thing for them, like I said before.”

Based on his performance at World Cup 2014 — Golden Boot winner with 6 goals and 2 assists — Rodriguez certainly does justify this fee.

“Would I jump at the chance to go to Real? No doubt about it, my answer is a resounding yes,” said Rodriguez.