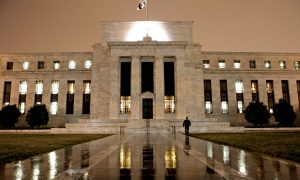 NEW YORK—James Grant needs no introduction. The chief editor of Grant’s Interest Rate Observer has been an eloquent observer and astute analyst of markets since he started his Barron’s column “Current Yield” in the late 1970s.

Grant recently won the Hayek Prize of the Manhattan Institute for his most recent book “The Forgotten Depression,” and the Gerald Loeb Lifetime Achievement Award.

Epoch Times spoke to Mr. Grant about the spotty track record of central bankers, deflation, gold and the gold standard, as well as negative interest rates and a ban on cash.

A negative interest rate is not only a tax on saving, it is the destruction of saving.

Epoch Times: What about some of the new ideas how to push monetary policy further, like negative interest rates

James Grant: Negative interest rates are an attempt to tax thrift. The idea of earning dollar bills and putting those dollar bills in a bank and having them accumulate over time, the accumulation of which is compounded over time by the magic of compound interest, that is called saving.

Now there is an alternative to saving which is called investment or speculation. It involves much greater risk. A negative interest rate is not only a tax on saving, it is the destruction of saving.

What negative interest rates do, is remove that negative increment, 1 percent, 2 percent, 3 percent a year from one’s principal. Not to mention what inflation itself does, if there is inflation. Interest rates are positive because in general people prefer things now rather than later. There’s a reward for waiting, a reward paid to the saver for waiting and that’s called interest.

Negative interest rates seem to turn that aspect of human psychology on its head and they reward you for wanting something now. It doesn’t make sense. So negative interest rates are a conceit of the academic economists who run the monetary institutions of the world. I think the theory is dubious and the practice, as we have seen it so far, is equally doubtful.

Radical monetary policy begets more of the same, that has been the rule. What doesn’t work … there’s more of it.

Epoch Times: What about the idea to ban cash?

Mr. Grant: Here’s a bet I would make. Not sure even odds, but a reasonable bet would be that within the next year or 18 months the European Central Bank would call in the 500 Euro note and say that after a certain date it will no longer be legal tender. We will exchange them up until that date for 50 Euro notes.

But you hear this persistent beat, drum beat in Bloomberg and the Financial Times and other organs of advanced monetary thinking, which is that we must retire, we must get rid of these large denominations because they compromise central bank control. They facilitate terrorism and terroristic financing because they are the very essence of money laundering; we must get rid of them.

Well, these thoughts are widespread and what precedes implementation of these ideas is a discussion of them. I think this is coming.

Epoch Times: What would people do?

Mr. Grant: If interest rates were reduced to less than zero and if large denomination bills were retired, what would one do with one’s money? This one reason why the gold market is on a ferocious tear to the upside because people are thinking: “Wait a second. If that’s what they want to do to my money, if they want to tax it for it being money, and if they want to restrict my freedom to move things outside the banking system, I’m going to get outside the banking system legally in a time-tested way, and lay some of my wealth apart in gold, which cannot be created through the swift tapping of computer keyboard as can be done with currencies.”

Epoch Times: People still have the understanding that gold is money.

Mr. Grant: I think there is some atavistic sense to people that gold is something more than a commodity. You’ll find gold described as a commodity in the newspapers, but to people, it’s not really a commodity.

It’s not exactly money. It’s not legally money these days but it is an ancient and legacy form of money. There is some deep-rooted understanding of that. When you see a gold coin I think most people warm to it. They think it’s something warm, precious, and monetary about it.

Gold Prices Crash: Is This the End of the Bull Market?

Bitcoin needs to be explained. You need an instruction manual for Bitcoin, but gold is self-explanatory.

Epoch Times: What about silver?

Mr. Grant: I don’t pay much attention to it. It was always a subsidiary monetary metal. It has industrial uses; it doesn’t have the unique monetary properties of gold. You need a whole lot of it to make a great sum of money. With gold, you need much less of it. Between the two of them, I’m very partial to gold.

Silver will tag along with gold. If this is a new bull market for gold, silver is a monetary metal, it’s also an industrial metal and its price at the margin is both moved by industrial demand and by monetary demand, the latter being much smaller I think. Certainly less pure as a monetary play.

Epoch Times: What happened to gold during the last five years, central banks were printing money and it didn’t go up. Also, there was talk about market manipulation in the futures market.

Mr. Grant: Has it only been five years? I thought surely it was 50 years in the wilderness. I think you’re being rather gentle on the gold people. I’ve been bullish on the stuff all the way up, and then all the way down. I should have seen some of this coming. I did not and I’m not ready to fob it all off on manipulation or intervention. For whatever reason it got ahead of itself and the world had not seen a demonstration of the futility or at least of the dubiousness of these monetary experiments.

So it was a bear market and some of us rode these mining shares down nine zero percent, that’s 90 percent. That’s called not getting it right. I’m not ready to blame the conspirators though I’d like to get them in a room alone and pop them in the nose if there were any.

So what is different now? It seems to me that now, there is a manifest failure of the Ph.D. standard, among other things manifested by the false move in December on the part of the Fed and the utterly unscripted disaster of the financial markets so far in 2016.

They must be telling us something. If what they’re telling us is that this is a recession or soon to be, the Fed will have been caught raising its rate at the very worst time, by its own reckoning. People are confronted by the fact that, never mind the possible elimination of large bills, never mind the looming risk of negative nominal interest rates, the world is now faced with the fact that these people, well-intended as they are, and well-credentialed as they are, know no more about the future than I do, which is not much.