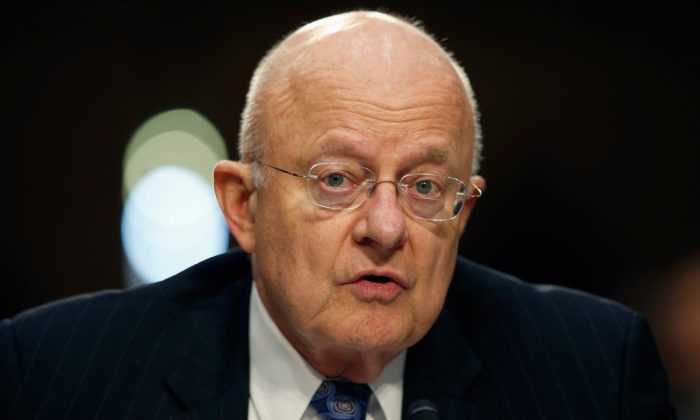 Director of the National Intelligence James Clapper speaks on Capitol Hill in Washington on Feb. 9, 2016. (AP Photo/Alex Brandon)
US

Director of National Intelligence James Clapper told a House committee on Thursday that he has submitted his resignation Wednesday night.

“As required of all appointed Administration officials, DNI Clapper has signed a letter of resignation effective at noon on Jan 20, 2017,” the agency tweeted on Nov. 17.

Clapper addressed the matter in Congress. The 75-year-old was expected to step aside since President-elect Donald Trump is expected to appoint his own officials.

“(I) submitted my letter of resignation last night, which felt pretty good,” he said, reported CNN. “I have 64 days left and I’d have a pretty hard time with my wife going past that,” Clapper told California Rep. Adam Schiff.

As required of all appointed Administration officials, DNI Clapper has signed a letter of resignation effective at noon on Jan 20, 2017.

All members of an outgoing administration have to submit a resignation at some point.

Clapper, meanwhile, told the House intelligence committee on Thursday that Russia will probably continue to conduct information warfare against the U.S., according to The Associated Press. Clapper said the intelligence community has less insight into how Wikileaks obtained the emails.

Hacked emails from Democratic Party officials were released by Wikileaks during the presidential campaign, revealing details embarrassing to Hillary Clinton’s campaign. The intelligence director and the Department of Homeland Security said in October that based on the “scope and sensitivity” of the hacking efforts, only Russia’s “senior-most officials” could have authorized the hacking. Russia has denied involvement.