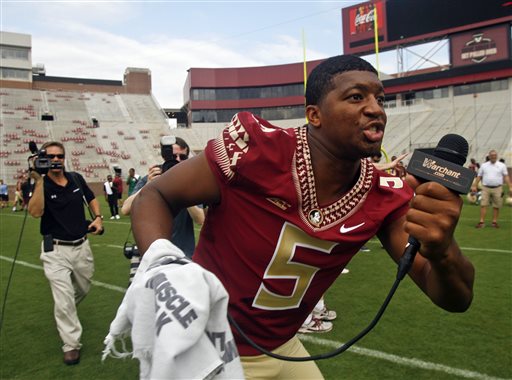 In this Aug. 10, 2014, file photo, Florida State quarterback Jameis Winston searches for teammates to interview during NCAA college football media day in Tallahassee, Fla. Winston has made lewd comments about women and Florida State coach Jimbo Fisher says he is deciding whether to bench the Seminoles' quarterback for his "derogatory" remarks. Several students tweeted Winston stood on campus Tuesday and shouted a lascivious comment that may have derived from an internet meme. (AP Photo/Phil Sears, File)
Life & Tradition

Amid crude comments allegedly made by Jameis Winston this week, resulting in a half-game suspension, his girlfriend, Breion Allen, made an awesome football catch a few months ago.

Allen is a basketball player at Rice. She has a Twitter account, but she hasn’t said anything about the suspension handed down to Winston, who plays quarterback at FSU.

The whole thing was uploaded to Instagram, which can be seen here:

Here’s an AP update on Winston:

FSU benches Winston for 1st half of Clemson game

TALLAHASSEE, Fla. (AP) — Jameis Winston will be a spectator in the first half of Florida State’s showdown against Clemson Saturday after making “offensive and vulgar” comments about women — the latest embarrassment in a growing list of poor decisions off the field.

Florida State interim President Dr. Garnett S. Stokes and athletic director Stan Wilcox announced in a joint statement Wednesday that the quarterback also will undergo internal discipline, but did not provide details of the punishment.

Several students tweeted Winston stood on campus Tuesday and shouted a lascivious comment about female anatomy that may have derived from an internet meme.

The 20-year-old Winston addressed his inappropriate comments before Wednesday’s practice at his weekly press conference, saying: “I have to tone it down.”

The Heisman Trophy winner has made similar comments after previous incidents and Florida State seems to be growing less tolerant of his discretions.

While playing for the Florida State baseball team, he was suspended for three games and completed 20 hours of community service after acknowledging he stole $32 worth of crab legs from a local grocery store in April. Before the football season, he said he had matured, learned what it takes to be a leader and understood that he needed to be more careful in his personal life.

The school president and AD admonished him Wednesday for doing just the opposite.

“As the university’s most visible ambassadors, student-athletes at Florida State are expected to uphold at all times high standards of integrity and behavior that reflect well upon themselves, their families, coaches, teammates, the Department of Athletics and Florida State University,” their joint statement said. “Student-athletes are expected to act in a way that reflects dignity and respect for others.”

The university is currently under investigation by the Department of Education for the way it handles reports of sexual assault, including a case involving Winston. The investigation was prompted by a complaint from a FSU student who says Winston assaulted her in 2012.