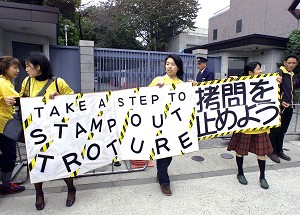 Japanese members of Amnesty International hold a banner in protest against use of torture at the entrance to the Chinese Embassy in Tokyo. (Kazuhiro Nogi/AFP/Getty Images)
China

BEIJING—An ethnic Mongolian jailed in China for separatism and spying says he is being regularly tortured in prison for a crime he did not commit, according to a letter pleading his case with the Chinese authorities.

Hada was tried behind closed doors in China's northern Inner Mongolia region in 1996 and jailed for 15 years for separatism and spying and his support for the Southern Mongolian Democratic Alliance, which sought greater rights for ethnic Mongolians.

Amnesty International considers Hada a prisoner of conscience and has expressed fears about his well-being.

“As far as the prison authorities are concerned, they have constantly employed cruel torture, brutal corporal punishment and ill-treatment,” Hada wrote, according to a statement from the exiled Southern Mongolian Human Rights Information Centre.

“They asked inmates to beat me (and) confiscated my large amount of belongings and property,” the group quoted him as saying, citing a recent conversation with his wife, Xinna.

Hada ran a Mongolian-language bookshop in Hohhot, along with Xinna. Inner Mongolia is supposed to have a high degree of autonomy, but like Tibet and Xinjiang in the far west, Beijing in practice keeps a tight rein on the region, fearing ethnic unrest in the country's strategic border areas.

China's treatment of its ethnic minorities has leapt into the limelight following recent unrest in Tibet and the pro-Tibet protests which have dogged the international leg of the Beijing Olympic torch relay.

Decades of migration by the dominant Han have made Chinese Mongolians a minority in their own land, officially comprising less than 20 percent of the almost 24 million population of Inner Mongolia.

Hada said that the charges against him had been trumped up.

“The Southern Mongolian Democratic Alliance is a social entity, not an anti-revolutionary clique. Freedom of association is a legal right of citizens granted by the constitution,” he said.

“I have never passed on any classified document to any foreigner,” Hada added.

China denies mistreating Hada, despite frequent claims of abuse from his wife, and has defended his sentence as being in line with Chinese law.