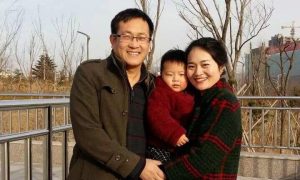 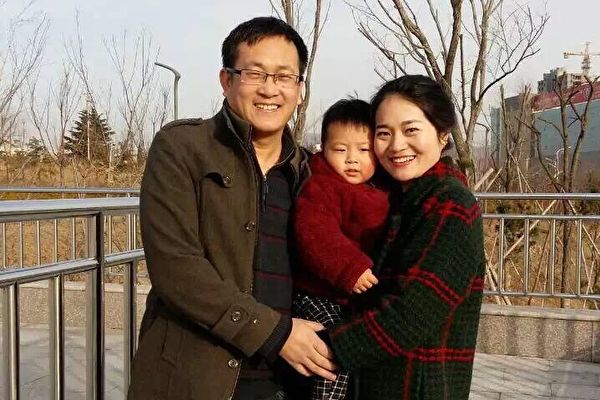 Wang Quanzhang with his wife, Li Wenzu, and their son. Wang Quanzhang, a human rights lawyer, has been detained in China without trial since August 2015. (Courtesy of Li Wenzu)
China Human Rights

Years of tireless effort seemed to have finally brought the first glimmer of hope to the wife of jailed human rights lawyer Wang Quanzhang. Li Wenzu tweeted on June 26 the police had granted her husband a family visit, scheduled for June 28.

It’s been almost four years since Li, 34, saw her husband. Wang was arrested in July 2015, during China’s crackdown on hundreds of human rights activists and lawyers that later became known as the 709 Incident. He had since been held incommunicado, and Li said they received no phone calls from him, and her repeated requests for a visit had all been denied.

Their 6-year-old son is looking forward to their visit, and wants to ask his father about the meals he’s been given in prison.

“Linyi Prison has finally set a date for the meeting: At 8:24 this morning, Linyi Prison told me in a call that I can meet with Wang Quanzhang on June 28 at 2:00 pm!” Li wrote in a June 26 tweet.

Wang was a prominent figure in the human rights community for his work in defending the oppressed groups in China—farmers whose houses were forcibly demolished when the Chinese regime seized their lands; Christians who are hiding underground; and adherents of the persecuted spiritual discipline Falun Gong.

Wang’s work had drawn the ire of the authoritarian Chinese regime and in turn, brought him repeated jail time and torture.

Voice Outside the Prison Wall

Li said her original wish was to live a peaceful life with her husband and raise their child, she told the Vision Times in an interview on September 2018. But the detention of her husband had disturbed that world and encouraged her to step out for other people.

“You don’t have the right to choose the life you want ….The more I learn about what he has done, the more I feel that I should do things for him. He did it for others and ignored his safety, and I now stand up for my husband to rescue him.”

Over the past few years, Li and several other wives of jailed human rights lawyers have become a regular sight in front of the Tianjin Detention Center, and later, Linyi Prison in Shandong Province, where Wang was recently transferred.

The women used creative props, held up banners and called out Wang’s name to show their support for the imprisoned lawyer, and demanded the guards to let them visit him.

One time in 2016, Li and a few others held red plastic buckets inscribed with the Chinese characters “Quanzhang, [we] have faith in you, [we’re] waiting for you.” They were arrested for disturbing the public order.

On December 2018, days before Wang would be held under closed hearing, Li and the wives of three other renowned rights lawyers staged a symbolic protest against the lawlessness of the officials by shaving their heads, playing on the fact that the Chinese word for “hair” and “law” are similar in sound.

Since Wang’s arrest, authorities have threatened, harassed, and monitored Li. Despite the police intimidation, she has kept up her spirits, and took to social media to document and share the moments of her journey. By doing so, Li said she was sending a message to the authorities.

“We decided that if we would go to the detention center in the future, we should dress nicely and take pictures frequently,” Li told the Vision Times. “We wanted to tell them that we wives have not been scared away and have not given in—we are proud of our husbands.”

In November 2018, Li received the Edelstam Prize for her “exceptional courage in standing up for one’s beliefs in the Defense of Human Rights.”

“The attention that Mrs. Li Wenzu and the other wives have brought, not only to their husbands’ plight, but also to the state of the crackdown, is a wonderful example of courageous human rights activism,” said Caroline Edelstam, the director of the Sweden-based international monetary fund, commending Li’s “untraditional” and “instrumental” methods to defend human rights.

Wang was sentenced to four and a half years in prison for subverting state power at a secret trial held on Jan. 18, 2019. Following the court ruling, the U.S. State Department issued a statement condemning the charge, saying that they are “troubled” by the length of time of the pre-trial detention.

“Wang was among the first individuals detained during the Chinese government’s July 9, 2015 (“709”) crackdown on legal advocates for rule of law and human rights defenders, and the last to be tried,” said Robert J. Palladino, the State Department’s deputy spokesperson.

Li had decided to keep her hair short. “I won’t grow my hair long until you come back home,” Li wrote in a tweet in May.

“Although some people have questioned whether these things we do will have any effect … my answer is: It doesn’t matter if it’s useful or not, as long as it’s the right thing, I will do it,” Li wrote in a letter posted on Twitter, joking that she was becoming a student of Wang.