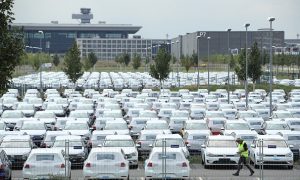 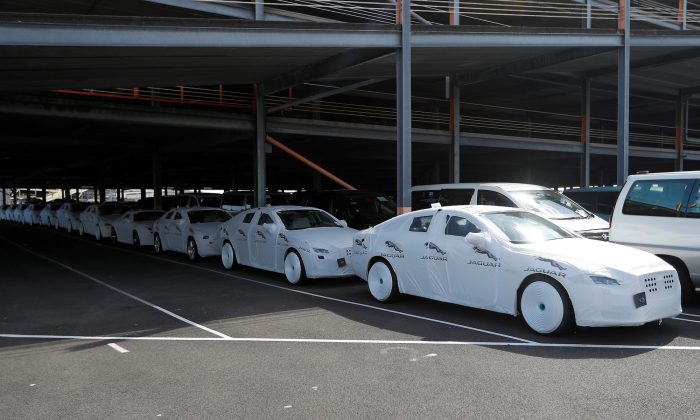 Jaguar cars ready for export are parked on the dockside at a port in Southampton, United Kingdom, on Aug. 16, 2017. (Reuters/Peter Nicholls/File Photo)
UK

LONDON—Britain’s biggest carmaker, Jaguar Land Rover (JLR), is set to announce “substantial” job cuts in the thousands, a source told Reuters, as the company faces double-digit drops in demand in China and a slump in sales for diesel cars in Europe.

The company builds a higher proportion of its cars in Britain than any other major or medium-sized carmaker and has also spent millions of pounds preparing for Brexit, in case there are tariffs or customs checks.

JLR swung to a loss of 354 million pounds ($450 million) between April and September and had already in 2018 cut around 1,000 roles in Britain, shut its Solihull plant for two weeks, and announced a three-day week at its Castle Bromwich site.

Up to 5000 jobs are expected to be cut today by Jaguar Land Rover. The losses are likely to be blamed over concerns over #Brexit and a drop in demand for diesel cars.@SwainITV is live from Castle Bromwich. pic.twitter.com/TDwPKk4rjj

Those cuts will be “substantial” and run into the thousands, the source told Reuters.

“The announcement on job losses will be substantial, affecting managerial, research, sales, design,” said the source, who spoke on condition of anonymity.

Production-line staff will not be affected “at this stage,” said the source.

The company, which employs nearly 40,000 people in Britain and has been boosting its workforce at new plants in China and Slovakia in recent years, declined to comment when contacted by Reuters on Thursday.

JLR, which became Britain’s biggest carmaker in 2016, had been on course to build around 1 million vehicles by the turn of the decade, but output in 2018 looks set to have fallen as sales in the first eleven months dropped 4.4 percent.

Sales in China between July and September fell by 44 percent, the biggest slump of any market for the central England-based firm, turning the country from its biggest sales market to its smallest.

Its chief financial officer said in October that the firm’s Changshu plant in China “has basically been closed for most of October in order to allow the inventory of both our vehicles and dealer inventory to start to reduce.”

Diesel accounts for 90 percent of the firm’s British sales and 45 percent of global demand, the company said last year, as demand in the segment tumbles following new levies in the wake of the 2015 Volkswagen emissions cheating scandal.

Like fellow automakers, the company could see its three British car factories grind to a halt in fewer than 80 days if lawmakers next week reject a deal by Prime Minister Theresa May, leading to tariffs and customs checks after a no-deal outcome.